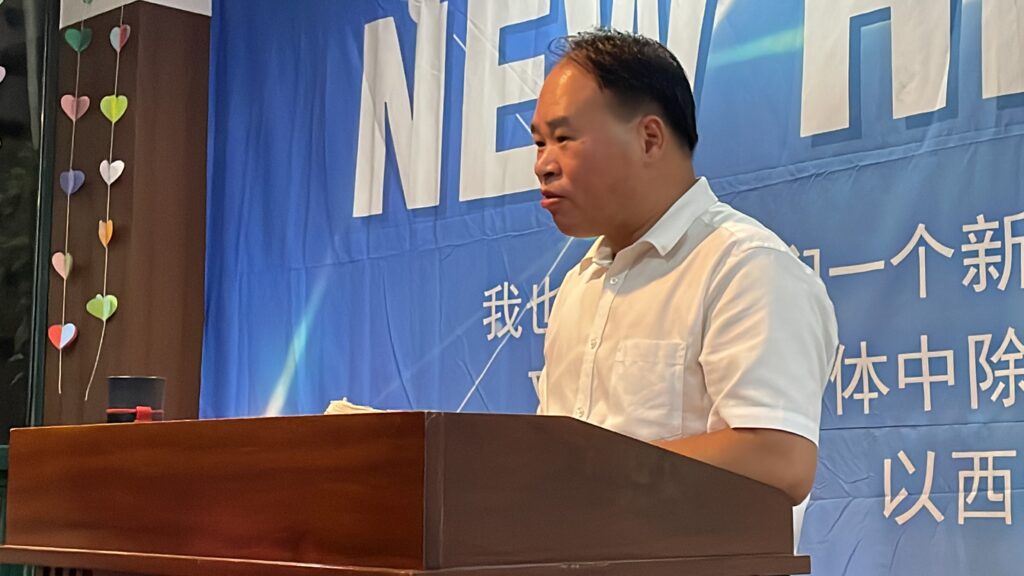 (Thailand—October 25, 2022) Amid growing concerns about transnational kidnapping by the Chinese government, Pastor Pan Yongguang of the Mayflower Church released a statement of faith, denying he would ever return to China or take any other uncharacteristic measures.

The Mayflower Church endured harsh persecution from the Chinese Communist Party (CCP) while living in Shenzhen. They moved to South Korea in 2019 and then to Thailand in late August 2022 to apply for UN refugee status. CCP agents have relentlessly harassed and monitored them during their time in Thailand, and all signals indicate the congregation is in imminent danger.

ChinaAid partners and staff work tirelessly around the clock to insure the church’s safety as they wait for their interviews from the UN office in Bangkok or a response from the US State Department.

The Chinese government has a history of not only kidnapping dissidents and refugees in Thailand but forcing them to commit suicide or provide a false confession. Thai immigration has already questioned ChinaAid partners on the whereabouts of Pastor Pan Yongguang. In the case of these outcomes, Pastor Pan prepared a statement of faith to assure the international community and fellow believers of his resolve. Read the full statement below:

Official Statement of Faith and Intent by Pastor Pan Yongguang

I, Yongguang Pan entered Thailand on August 31, 2022, on a legal landing visa and filed a refugee claim with the UNHCR in Bangkok on September 5, 2022.  I, along with the rest of the members of the Shenzhen Holy Reformed Church of which I am the pastor, are represented by Alex Sonsev, a lawyer from the Center for Asylum Protection in Bangkok, Thailand.

I was personally threatened and harassed since submitting my refugee claim in Thailand.  My relatives still residing in China have been coerced by the PRC government to call me and attempt to force me to return to China.  During a September 5, 2022 interview with the Associated Press in Bangkok, interviews with myself and members of our church had to be stopped when operatives from China entered the venue where the interviews were taking place.  When I submitted my asylum application to the UNHCR Bangkok office, I was followed by suspicious persons. I have been filmed in front of my current residence and three times a pastor helping me has received phone calls from a Thailand travel agent and Thailand immigration inquiring of my present whereabouts and insisting that I present myself to the local Thai immigration authorities.

Based on the above apparent threats and the unspecified dangers: the possibility exists that I may be secretly kidnapped by Chinese Communist agents and returned to mainland China.  The possibility also exists that I may be arrested by Thai immigration authorities, be illegally escorted to mainland China, and “go disappeared” as have so many others who stood for the same principles of religious freedom and human rights that I also espouse.

I declare I will not return to mainland China voluntarily; I will not leave my family and church members without a pastor. I will not leave the Christian Church, and I will not betray my faith. I firmly believe that my life belongs to Jesus Christ, and I will not choose to commit suicide, no matter what the circumstances. If I lose my freedom, anything I do or say is not of my own volition, and is contrary to my declaration, and has no legal effect.

I solemnly swear and attest that the above is true and legally valid.

Give to the Mayflower Church

Lear more about the church's journey