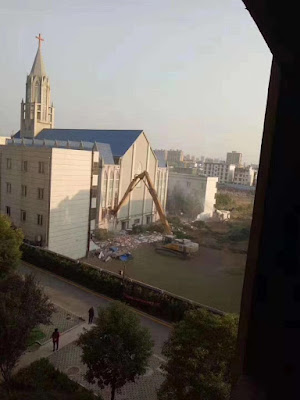 
(Funan, Anhui—Oct. 19, 2019) SWAT team members and anti-riot police destroyed a church in China and detained its pastors this week.

No legal papers ordering the church’s demolition were provided, but the officials tore it down on Friday. It could seat more than 3,000 people and was part of the country’s officially-recognized church network.

Usually, during services, the church was nearly full.

It was mid-worship service when the destruction unexpectedly took place, and the church lost all of its property.

During the demolition, Christians knelt in front of the authorities, begging them not to tear down the building. Some fainted and had to be sent to the hospital.

The church was not compensated for its loss of property.

“This is yet another clear example showing the escalation of religious persecution today by the Chinese Communist regime,” said ChinaAid President Bob Fu. “The total disregard of religious freedom’s protection as enshrined in the Communist Party’s own Constitution tells the whole world President Xi is determined to continue his war against the peaceful Christian faithful. This campaign will surely fail in the end.”