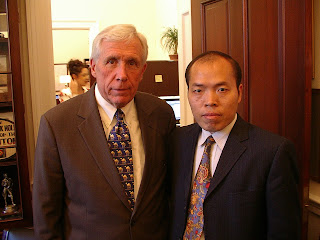 Gathering at Christ Church Anglican in Midland, Texas, at 11:30 a.m. on March 21, a group of mourners remembered the life and legacy of the deceased, Dr. Li Baiguang, who was a giant in the world of Chinese human rights champions. At the service, ChinaAid President Bob Fu gave a call to worship, followed by a eulogy delivered by Doug Robison, Bible recitations, worship songs, and a sermon by Pastor Daniel Stephens.

Senator Marco Rubio, who was initially listed as attending the D.C. event, sent ChinaAid a statement offering regrets on his inability to attend the service and commended Li for his tireless human rights and religious freedom efforts.

“As you gather today to honor the life, work and legacy of Dr. Li and to stand in solidarity with others like him who pursue justice on behalf of the marginalized, persecuted and oppressed in China, we can take comfort in the knowledge that this courageous and principled man of faith has no doubt heard the words we all long to hear, ‘Well done, my good and faithful servant,’” Rubio said.

Dr. Li passed away mysteriously just hours after being admitted to the hospital for a stomachache on Feb. 25. His death was confirmed at 3 a.m. China Standard Time on Feb. 26. Despite no previously known medical conditions, physicians alleged that his liver failed and he bled out.

Prior to his death, Li received anonymous death threats after a group of unidentified individuals kidnapped him in Zhejiang province and beat him for representing victims of an illegal governmental land grab. They threatened to dismember him if he didn’t leave the area by 10 a.m. the next day. Frightened, Li left and reported the incident to the police, who discovered that the car he was abducted in was owned by a female official.

During his career, Li took multiple trips to Washington, D.C., with ChinaAid delegations, meeting with prominent officials, many of whom were in attendance at the D.C. memorial. In addition, he also met twice with President George W. Bush. His last trip occurred in February just weeks before his death.

Despite extensive threats to his safety, he opted to return to China to continue defending human rights.

ChinaAid honors Li’s sacrifice and hopes that others around the globe will take up the torch of his legacy, continuing the fight for universal freedom until everyone has the right to peacefully live and worship as they choose. If you wish to contribute to the efforts of lawyers who are continuing Li’s work of standing up for religious freedom, human rights, and rule of law, you may make a donation to ChinaAid’s legal defense fund, which was recently renamed the Li Baiguang Religious Freedom Defense Fund in the lawyer’s honor.

When the National Endowment for Democracy presented Li Baiguang with its Democracy Award in 2008, just weeks before the Beijing Olympics, we noted that he had been detained and physically attacked many times for his work, the first time in 2004 when he had brought legal action on behalf of 100,000 peasants who had been forcibly evicted from their land. Frank Wolf, who is such a champion of human rights, presented the award to Li Baiguang that day, comparing him with the great Soviet dissidents and Nobel Laureates Alexander Solzhenitsyn and Andrei Sakharov. Li Baiguang truly belonged in their company, because of his utterly selfless devotion to the principle of human dignity and individual liberty, and because of his boundless courage. This is the quality that ChinaAid recognized last year in presenting Li Baiguang with its own Courage Award “For Courage in defense of religious freedom and the rule of law.”

Li never gave up in his peaceful battle to defend the democratic rights of all Chinese citizens. As today’s program notes, just month before his death he was kidnapped and beaten in Zhejiang province for defending a group of farmers whose land had been stolen from them by the Communist Party. His kidnappers threatened to kill him if he didn’t leave the area by the next morning. He reported the case to the police, for which he received repeated death threats. And now he is dead.

How can we not believe that Li was murdered? Did Liu Xiaobo, imprisoned and denied medical attention, die a natural death? Did Tenzin Delek Rinpoche die a natural death, after 13 years of prison, torture and abuse? Li was in Washington just weeks before his death to attend the National Prayer Breakfast. He also visited NED, and no one saw indication that he was in ill health. He returned to China to continue his work and was dead just two weeks later. Why?

As it happens, the very same month that Li was taken from us, the Chinese regime unveiled a new set of regulations on the practice of religion that put unregistered churches beyond the pale. Li belonged to such a church and defended their battle to survive and the rights Chinese citizens who worshipped in them. The laws introduced in February impose stiff fines on people who organize services in unregistered churches, as well as on landlords who allow their properties to be used for such a purpose. They restrict donations to religious institutions and tighten controls over online religious content. They make it more difficult for believers to go abroad to attend religious conferences and workshops, and they crack down on religious schools and camps for young people.

This is what Li Baiguang believed in – the rule of law, religious freedom. That’s exactly why he was honored by ChinaAid. And for that reason his work was intolerable to the Chinese regime.

Why can’t the Chinese government accept the principle of religious freedom? The reason given by The Economist magazine in a report last week is that the Communist Party “worries that Protestantism is spreading quickly among young, educated urbanites whose talents it needs to help modernize the country.” According to a report last month in AsiaNews.it, its worries are well founded since polls show that “more than 60% of Chinese university students in Beijing and Shanghai are eager to learn about Christianity.” The Communist Party would like to stem the growth of faith among young people, but according to this report “The religious awakening in China now seems uncontrollable.” And why shouldn’t it be , given the death many decades ago of communist ideology and its replacement by an asphyxiating combination of cynical power worship, rampant materialism, massive corruption, environmental degradation, and harsh repression that now passes for “the Chinese Dream” in Xi’s dictatorial utopia.

Xi has just overseen a colossal exercise of centralizing power in the Communist Party and in his own hands – he is now the Chairman of Everything for Life. He is trying to project China’s influence throughout the world through the multi-trillion dollar One Belt-One Road Initiative, the expansion of its military and Sharp Power tools of manipulation and control, its bullying tactics against anyone who believes that Tibetans have rights, and the declaration issued at the 19th party congress that China is not just a rising economic power but also an ideological rival to democracy, “a new option for other countries,” as Mr. Xi puts it.

And yet with all of this, Xi fears the peaceful house-church movement, religious believers, and a non-violent lawyer like Li Baiguang – all because he knows that with all his power, there is a higher power that the party cannot touch, a power that excites the imagination and the spirit of simple people in China who continue to hear its still, small voice.

Li Baiguang heard that voice. When Li received the Courage Award from ChinaAid last year, he cited a sentence from Romans 13 that “The night is nearly over, the day is almost here.” I went back and read that chapter, which opens with a message that resonates today with unusual power and that I’m sure gave Li the hope to carry on: “Let every soul be subject unto the higher powers,” it reads, and “whosoever therefore resisteth the power…shall receive themselves damnation.”

Li is now dead, but his spirit and belief in a higher power live on within the hearts of countless Chinese citizens, who will carry on his struggle for a more human and lawful society. Let us today pledge ourselves to the realization of that true Chinese dream.