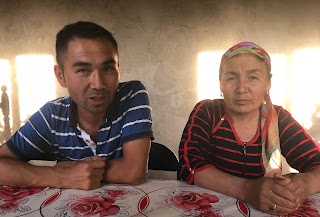 (Changji Hui Autonomous Prefecture, Xinjiang—Oct. 3, 2018) A Kazakh woman, who had been missing in China’s northwestern Xinjiang for nearly three months, appeared at her mother’s funeral in June, handcuffed and escorted by police.

The woman, Bahati Guli, was arrested on March 15, a day after she arrived in China from Xinjiang to see her ailing mother, after she filled out necessary paperwork at the police station. Authorities did not give a reason for her arrest. Guli, who is of Kazakh descent and obtained Kazakhstan citizenship after her family emigrated from Xinjiang in 2007, then lost contact with her family.

Her mother passed away three months later, and Guli appeared at her funeral, handcuffed and overseen by government agents. According to her husband, Masaili Tangaiti, she was taken into custody again after the funeral. At that time, relatives realized that she had been imprisoned in one of China’s “re-education camps.”

Tangaiti said his wife often visited family members in Xinjiang, but she has never before been arrested. He hopes that Xinjiang authorities can give a reason for arbitrarily arresting his wife and that the international community can intervene and help his family reunite. He currently lives with the couple’s three children in Almaty, Kazakhstan.

China is arresting increasing amounts of Kazakhs and people of other descent, who are often Muslim, fearing terrorism might cause unrest in the region. However, most people are arrested even when they have no evident connection to terrorist organizations or plans to commit acts of terrorism, officials profiling them only by their race and religion. According to the United Nations, more than one million Kazakhs have been sent to “re-education camps,” where they experience torture, are forced to study Chinese propaganda, and are given inadequate amounts of food. These camps are often overflowing, and officials are closing schools, hospitals, and even factories to accommodate greater numbers of innocent people.

Reyihan Rehemuhan, a Kazakh Chinese woman who immigrated to Kazakhstan with her family last year, said her husband returned to Xinjiang on Sept. 4, 2017, after a village committee asked him to return. Officials then confiscated his ID, and he has not been permitted to return.

“I am unable to support myself,” Rehemuhan said. “My hands have problems, I am very sick, and I even need help while walking … I ask [Kazakhstan] President Nazarbayev, the [Kazakhstan] Ministry of Foreign Affairs, and the United Nations for help in hopes that my husband can be reunited with us soon.”