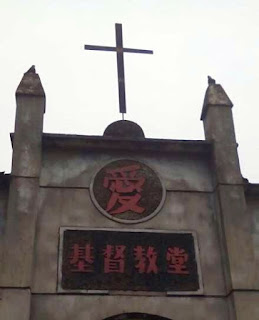 “A notice was sent to people in Fuyang District, Hangzhou, stating that the crosses from all churches — at least 43 churches — in the district will be removed,” said Pastor Zhang Mingxuan, president of the Chinese House Church Alliance. “The authorities are carrying out the mission of the ‘Three Rectifications and One Demolition’ campaign.”

“This major church-state conflict is caused purely by the Zhejiang Communist Party leadership with the consent and encouragement of the central government,” China Aid founder and President Bob Fu said. “Chinese government leaders should be held accountable if this order escalates to a violent clash. The only viable solution is to respect the Chinese citizens’ true religious freedom as enshrined in the Chinese constitution and in universal norms to which the Chinese government has openly committed.”

“Though some of the threatened churches are government-sanctioned Three-Self Patriotic Movement (TSPM) churches, they still want to safeguard the cross,” Pastor Zhang Mingxuan said. “Some recently affected churches have reinstalled their crosses.”

The conference, according to a report on the Yiwu News, published on May 5, is set to take place in mid-June.

“Last year, the authorities of Zhejiang removed churches’ crosses,” Hangzhou Christian and freelance journalist Zan Aizong said. “Some people speculated that the ‘Three Rectifications and One Demolition’ campaign was a pilot program in Zhejiang.”

“Legally speaking, there’s no law that says the cross is illegal,” Zan said. “Christians have every right to re-erect crosses. However, there’s a possibility that it’ll be removed again.”

“Another purpose of this campaign is to reduce Christianity’s impact on the Chinese society,” Guo Baosheng, a pastor at a Chinese American church, said. “The government just wants to hide the cross and make it very small. Of course, all of this persecution furthers their goal of the sinicization of Christianity. They want to reform Christianity and turn it into a variant to serve socialism and the Communist Party.”
g District of Hangzhou, the provincial capital, and the neighboring city of Huzhou to remove the crosses from atop their church buildings on Monday and Tuesday. Then, on Wednesday, crosses in Lishui were forcibly removed.

China Aid reports on cases such as this to expose the abuse against Christians and other religious practitioners to rally support for advancements in religious freedom and rule of law in China.