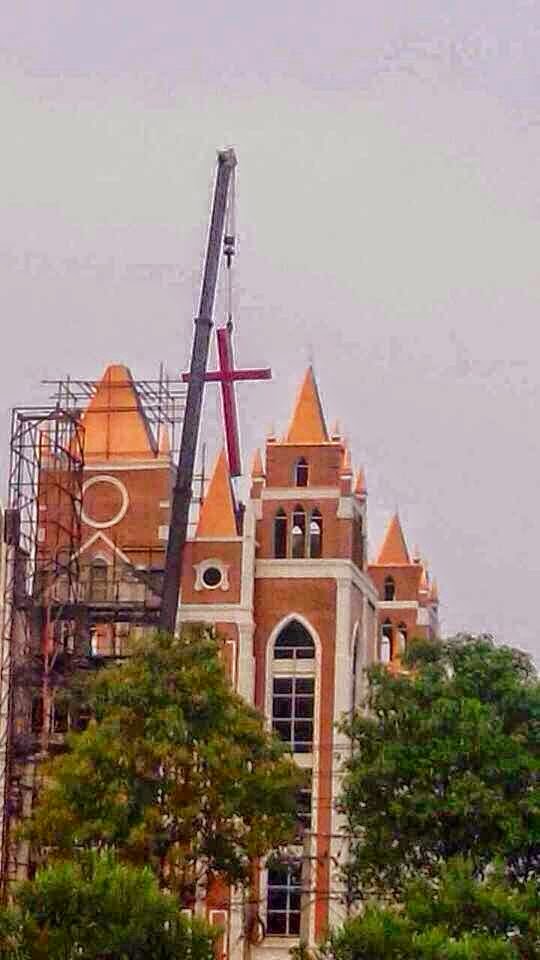 
(Zhejiang—May 9, 2014) Less than two weeks after the demolition of Sanjiang Church on April 28, more than 15 churches have reported persecution relating to coastal Zhejiang province’s “Three Rectifications and One Demolition” campaign; however, the number of churches facing demolition or modification is rumored to be closer to 50.

Wuai Church in Cangnan County, Wenzhou, which was still under construction, was forcibly demolished on May 3. One local pastor, who wished to remain anonymous, said he wasn’t sure if the four-story, Protestant church was government-sanctioned or not. “In Wenzhou, it’s hard to tell a house church from a Three-Self church. Many churches are very independent, but they may have registered with the government,” he said.

The same day, a Catholic church in Liushi, Yueqing County, Wenzhou, was demolished. “The church building in Yueqing was…funded by the boss of Renmin Group, [a large corporation] in Yueqing. It was built in a forest on a hill,” Mr. Tan, a Yueqing citizen and Christian, said. “The authorities claimed the building didn’t have approval.”

“This time, the TSPM churches and house churches united as brothers and sisters,” Mr. Tan said in reference to the local community coming together to stand guard at the Catholic church, similar to what Wenzhou-area Christians did at Sanjiang Church before its demolition. “The situation was very tense, and we walked together—whoever had a loving heart came out to protect the church,” he said.

In addition to the two demolished churches, five churches had their crosses demolished, and two hospitals had crosses, which served no religious purpose, removed from the roofs of their buildings. One church had their sign taken down, and another’s cross was covered.

On Tuesday, the cross on the steeple at Baixi Christian Church, in Yueqing County, Wenzhou, was removed despite being an approved structure. Church members told China Aid that the size of the cross was reduced during planning in order to meet government guidelines and that the government showed up to demolish the cross with no prior warning.

The same day, the cross topping Taoyun Catholic Church in Wenzhou was covered. “For some other crosses, [the ones that haven’t been demolished], they are covered with a big piece of thick, black cloth or a scaffold is built around it to cover it up,” a Wenzhou pastor said.

“Throughout the world, such things have never happened either to the Catholic churches or the Protestant churches,” the pastor said. “In the history of mankind, including Islam, [referring to invasions by the Moors and the subsequent conflicts with Christians in the Middle Ages], and the Crusade by the Christians, there were never such insulting incidents.”

In Hangzhou, the provincial capital, the cross on Qiaosi Sunday Church was demolished on Wednesday. “Everybody is crying. According to the plan of the Zhejiang provincial government, they are [supposed] to demolish crosses at roadsides that can be seen. Their next step is to demolish the crosses that cannot be seen,” an anonymous pastor said.

Also on Wednesday, crosses were demolished at a Catholic church in Cangnan County, Wenzhou, at Sabbath Day Church and at a church in Haining, Jiaxing, Zhejiang. The same day, the crosses on top of two hospitals in Jiaxing were demolished, even though the crosses reportedly had no religious meaning.

Furthermore, the sign at the Christian Zhuen Church in Yiwu, Jinhua, Zhejiang, was removed sometime last week. Photos from believers show three men taking down the sign, which has a cross and is red and white.

Other churches receive demolition notices
In Ningbo, a seaport city in Zhejiang, Xiaying Church in the Yinzhou District received a demolition notice, stating that the Church must demolition the building themselves by May 20. Church members said they didn’t anticipate their newly built worship site to be accused of being an “illegal structure.”

Believers also said that they were originally told that only the cross would be demolished, but are now being told that the whole church is to be demolished. The church is calling for members to guard the church and engage in a fasting prayer from May 5-20.

Pastor Zhang Mingxuan, president of the Chinese House Church Alliance said that he wasn’t sure if Xiaying Church was a house church or a Three-Self church. He added that he had been trying to get in contact with church leaders unsuccessfully.

Detained believers to be released

Approximately 10 Christians were detained in and around Wenzhou before and after the April 28 demolition of Sanjiang Church, some of whom are reportedly being released sometime next week. “Brother Zhao of Yueqing County was detained while he defended Sanjiang Church, and he will soon be released,” Zhang Mingxuan said.

“Among the co-workers of the local churches detained in Yongjia County and other places, some are still being detained,” he said.

Other Christians are reporting that some of the detained Sanjiang Church members may face criminal charges.

“Some people think this is only an issue with Sanjiang Church,” one pastor said. “Now, we have gradually come to see that…instead, more churches that have all the necessary papers are being demolished. I want more brothers and sisters to awake, and I hope more co-workers of the church see the urgency of our problems.”

“The ‘Three Rectifications and One Demolition’ mentioned in the document put forward…three aspects,” a Wenzhou Christian said. “First, the crosses should be rectified and improved. Second, some illegal religious structures should be demolished. This is especially true of illegal structures of privately established church sites, which must be demolished.”

“Third, they want to establish a long-term mechanism for establishing future sites for Christian worship and technical standards of structure. They say the new structures should fit the Chinese cultural characteristics.”