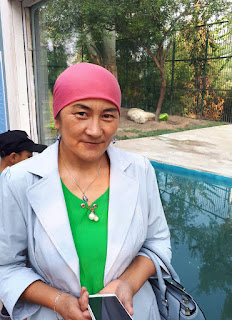 In an interview with a ChinaAid reporter yesterday, Oman Anshakhan, Mogudong’s husband, said, “My wife was unwilling to have an abortion. She has a brother who is a local Imam, and [the authorities] also threatened him, saying, ‘If you refuse to have an abortion, your brother will be arrested.’ On Jan. 5, they performed an abortion on her and sent her home. Her passport and documents were all taken away.”

On Jan. 27, her brother was taken into custody.

It is likely that the officials forced the doctors to contrive the diagnosis in order to restrict her freedom.

Xinjiang’s family planning regulations allow urban residents to have up to two children, while peasants and herdsmen who are ethnic minorities may have three. Anshakhan said that he and Mongudong should qualify for three children, especially since he is a Kazakh citizen. They already have two.

On Jan. 25, Anshakhan published a video in Almaty, Kazakhstan, crying out for help from the U.N. Commission on Human Rights, the World Human Rights Organization, and the international community, saying that his wife and children had been placed under house arrest. He asked that they help him negotiate their release with the Chinese government so that they may leave the country.

ChinaAid exposes abuses, such as those suffered by China’s many victims of forced abortion, in order to stand in solidarity with the persecuted and promote religious freedom, human rights, and rule of law.