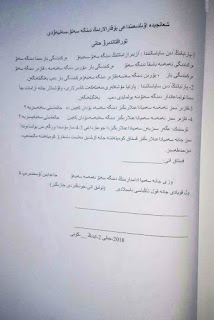 (Altay, Xinjiang—Feb. 25, 2018) Fearing retribution, Muslims in a county of China’s northwestern Xinjiang are being forced to abandon their religion as authorities collect information on their beliefs.

The government in Qiganjidie County, located in Altay, Xinjiang, urged its 5,000 residents to report the beliefs of their family members to township government branches. 85 percent of the affected people are of Kazakh descent, and most of them practice Islam. One of the local villagers said that they were being forced to abandon their religion. “Party members can’t be religious, civil servants can’t be religious, and students under the age of 16 can’t be religious. [The officials’] general purpose is to prevent you from believing.”

However, another local said, “Villagers are finding it hard to fill in whether they are religious or not. If they say they believe, there could be trouble, such as land being taken back. There could also be other pressures.”

The authorities’ drive to forcibly convert Muslims from their faith to the state-sanctioned atheism echoes a mass arrest of Islamic adherents between the ages of 24 and 32 for refusing to surrender Qurans and prayer materials to the officials, which occurred on Sept. 7, 2017. Their relatives still do not know their whereabouts and have not received arrest notices, and many of them have wives and children.

ChinaAid reports about the human rights abuses endured by people in Xinjiang in order to promote religious freedom, human rights, and rule of law.