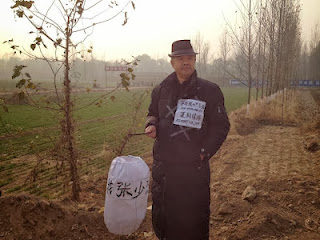 (Nanle, Henan—Nov. 29, 2013) The Nanle County Christian Church has released its application for a permit to protest the events of the past weeks that began with the detainment of Pastor Zhang Shaojie and other believers (https://chinaaid.org/
2013/11/three-self-
sanctioned-church-pastor-
and.html) and a letter calling for the aid of fellow Christians.
The full text of the protest permit application and the call for help can be found below.

Protest Permit Application
As a member of the global Christian church, this church, for one thing, dedicates itself to proclaiming the gospel of “salvation through the crucifixion of Jesus Christ,” persuading people to repent of sin and turn to the holy, true God, and for the other, compelled by the great redemptive love of God, this church follows God’s commands, showing care and compassion to the poor in society, founding orphanages and nursing homes, and working hard to promote social justice and advance social righteousness.

Nevertheless, since Nov. 15, 23 believers of our church, including Pastor Zhang Shaojie, were taken into police custody. The majority of them have not received a criminal charge, any writte notice, nor have their families been told where they are detained.

Nov. 17 and 24 are Sundays on which our church met to have a regular service to worship the God in which we believe, and yet government employees, other than the employees of religious management agencies, intruded into the worship venue of our church without the permission of our management staff, walking around, peeping, taking photos, videotaping our meeting place without permission, and severely disrupted the normal worship service of our church. Many believers were threatened and received warnings from government agencies who forbade believers to leave their homes to attend worship service and severely interfered with the religious freedom of the believers of our church.

On Nov. 24, out of concern for the detained brothers and sisters, our church showed their pictures to believers attending worship service to encourage them to pray for those in chains, which was banned by force by certain government agents. It was a violation of our church’s worship service. Leaders of our church invited lawyers to give believers a seminar on the law with the intention of helping them act according to the law, but government agents forbade the lawyers to speak at the seminar. The lawyers protested in vain and had to cancel the seminar at last. The act was a violation of the law committed by law enforcement agents, which made the situation worse.

All the believers of our church are legal citizens of the People’s Republic of China and none have violated the law of the nation regarding religion. The incidents described above are not tolerable to believers. According to Article 35 of the Constitution of the People’s Republic of China, which says “Citizens of the People’s Republic of China enjoy freedom of speech, of the press, of assembly, of association, of procession, and of demonstration,” and Article 3, Article 5, and Article 6 of the Law of the People’s Republic of China on Assemblies, Processions, and Demonstrations, which say, “the citizens’ exercise of their right to assembly, procession, and demonstration shall be safeguarded by the people’s governments at all levels in accordance with the provisions of this Law,” “the competent authorities governing assemblies, processions, and demonstrations shall be the municipal public security bureau, county security bureau, or municipal public security sub-bureau in the localities where the assemblies, processions, and demonstrations are held; if the route of a procession or demonstration cuts through two or more districts or counties, the competent authorities thereof shall be the public security organ at the next higher level to the public security organs in such districts or counties,” and “for the holding of an assembly, a procession, or a demonstration, application must be made to and permission obtained from the competent authorities in accordance with the provisions of this Law,” we now submit this application for a permit to stage a protest. We expect a permit to be granted as soon as possible.

Call for aid
Dear brothers and sisters in other cities and regions,

We, a Christian church of Nanle county, Puyang city, Henan province, are suffering great trials and desperately needing your help.

Our church holds fast to the way of God and we dedicate ourselves to the growth of the Church and the harmony of society, but for this reason, we have also offended some law-breaking local officials who violated the rights and interests of the Church.

It all began in November 2013 when believers from our church went to Beijing three times of their own will to petition because of three incidents related to church property. Persecution started after the second batch of petitioners came back to Nanle, reached its peak when the third batch of petitioners came back to Nanle and Zhang Shaojie, Chairman of the Committee of the Three-Self Patriotic Movement of the Protestant Churches and the Christian Council, was arrested, and ended with the arrest of Fan Ruiling, leader of our church. A total of 23 coworkers and believers from our church were taken into custody in this event of religious persecution, including five main leaders of our church, who were arrested on fabricated criminal charges.

The Public Security Bureau of Nanle County as a law enforcement agency violated the law and none of their actions followed due legal procedure. Moreover, they disregarded the law and blatantly prevented lawyers from meeting with their clients. In this case, the whereabouts of four [of the five] key leaders of our church, Zhang Shaojie, Zhao Guoli, Wu Guishan and Zhang Cuixia, are still unknown and no one knows whether they are alive or dead. This incident of religious persecution in essence is the retaliatory acts of certain officials offended by the main leaders of a Christian church, who helped unprivileged groups defend their rights, and the persecution was imposed by the government on these believers.

On Nov. 16, 2013, the authorities of Nanle County sent in a large number of police to unlawfully arrest more than 20 believers of our church, including Zhang Shaojie, our church leader, and the whereabouts of a few people arrested remains unknown. Lawyers authorized by our church were denied visits to the arrested believers by the Public Security Bureau. For two weeks, the government has sent in several hundred policemen as well as government employees to prevent brothers and sisters of our church from studying the law on Sundays and using the law to defend their rights. Our church is currently in a very difficult situation.

Dear brothers and sisters, we are one family in Christ. In our hard circumstances, we firmly believe that victory is ours if we rely on the Lord. In the meantime, we hope brothers and sisters everywhere can support us and intercede on our behalf. We have applied for a permit to stage a protest and we hope you can come join us and show support. We will have a briefing after the Sunday service on December 1, 2013, informing brothers and sisters on the series of rights violation events our church went through lately. You are invited to join us then.

In Christ, we are united as one. Depending on the Lord for our fights, we will be victorious!