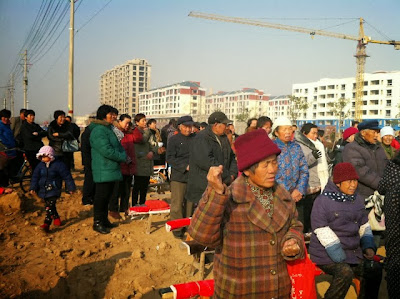 
(Nanle, Henan—Dec. 11, 2013) ChinaAid learned that officials again blocked several hundred believers from worshipping at the Nanle County Christian Church on Dec. 1, forcing them to gather in a forest and then alongside a road.

On Nov. 30, Nanle county authorities issued a notice stating that the Nanle County Christian Church building was in danger of collapsing, and demanded that believers stop using the building immediately.

On Dec. 1, church members voluntarily abided by the notice, and instead, a 7:30 a.m., gathered in a forest near the Nanhuan region of Nanle County, a site which the church pre-approved with the government.

At 9:20 a.m., Christians, who had traveled from places as far away as coastal Jiangsu province, began arriving. With this addition, the group reached more than 200 people. One of the church members reported that, as the group sang hymns, more people began filtering in from all directions.

Nanle county authorities arrived in “several dozen vehicles, hauling about a hundred people” at 9:38 a.m., the believer said. The authorities began to physically and verbally abuse the Christians. An elderly lady was bleeding after being slapped in the face, and one girl’s phone was taken from her hands and destroyed.

Church members said they didn’t retaliate, and voluntarily left the forest. From there, the group went to an open space alongside a road, which was under construction.

At the roadside destination, the director of the Nanle County Religious Affairs Bureau approached the believers. He expressed his desire that they instead gather at the church, not acknowledging that the government had deemed it “dangerous.” Per the director’s request, the believers made their way back to the church.

However, when the group arrived at the “condemned” church building, they encountered two familiar people, whom the government had tasked with leading the gathering, stationed at the church entrance. The men were Wang Qin and Dai Zhanmin, who are considered by the church to be heretics and cultists.

According to a church member, the men were kicked out of the church several years ago. They are said to theorize that when a person believes in the Lord and has established contact with Jesus, they are excused to commit crimes, such as those forbidden by the Biblical commandments, at will.

When the men began leading the service, the believers started shouting, “Get off the podium,” a church member said. In a way that is unclear, the believers managed to drive the men out of the church. During this, the men began claiming they were pastors appointed by the government to lead the church and to become directors of the Three-Self Patriotic Movement.

Zhang Shanshan, a daughter of the church’s imprisoned pastor, Zhang Shaojie, reported that after the two men were driven away, the government dispatched approximately 100 people to prevent the gathering from proceeding. Considering that it was around 12 p.m., the leader, filling in for Zhang Shaojie, led the Christians in a short prayer and ended the worship service for the morning, Zhang Shanshan said.

Also on Dec. 1, some of the previously detained believers were reportedly released for an unknown period of time; however, after the events of the morning, some believers were rearrested. There is very little information about why, when and who was released and rearrested.

“Last night I did not close my eyes for a moment: [worrying] that our church was closed, fearing brothers and sisters were hurt. I miss those who were detained! That is my family!” Zhang Shanshan said. She went on to describe the lives of some of the detained:

· Ruizhen is handicapped and sick with diseases. Every day, she took some Chinese medications. She was taken from the church without notice, and many days later, her arrest notice arrived, charging her with “disrupting the public order and gathering a mob to disturb public order.”

· Uncle Guishan’s son has a congenital heart disease, and now both parents are detained. Their son is being taken care of by the loving mamas of an orphanage.

· Muxiang and Lixiang both have two young children. Usually, [the kids] were taken care of by their parents. The children are still young, and don’t know what has happened. They only know to pray to Jesus and ask the Lord to bring their mothers home soon.

· Guoli is a loving father at the orphanage. Since he disappeared, the children at the orphanage have lost their smiles. When school is over, they ask, “Is Dad back home?” Each day, they pray, in tears, and beg the Lord to “bring back Dad.”

· Yan Beibei got married just two months ago, and he is still in his honeymoon [stage]. For the sake of God, he has sacrificed freedom. His wife has been worried, comforted by God.

· Zhixuan has a young daughter, and now his wife is seven months pregnant. Every day, she walks here and there with a big belly. She leads the choir and continues to work for the Lord.

· Jinxue is already in his old age and has high blood pressure and heart disease. He has fought for the Lord all his life, and now he is being detained.

· Junling has three daughters. The eldest one is 11 years old, and the youngest is two or three years old. How difficult it is for a wife raising three children all by herself!

· Zhijun is the father of two children. His son is four years old, and his daughter is two years old. His petite wife is taking care of the children while serving in the church. Every day, she is busy, going from here to there.

Another church member, Zhao Shengwei, was held for nine hours on Dec. 1, during which he was forced to read from “Regulations on Religious Affairs of Henan Province.” It is unclear if Zhao was one of the detainees who was released, or if he was detained for the first time on Dec. 1.

Zhang Shanshan added that when family members tried to give cotton-padded coats to detained believers to guard against below-freezing temperatures, none of the detainees could be reached. An elderly man who was bringing meals to the detainees told the pastor’s daugther that one Christian, Fan Ruiling, was huddled up in a corner, sick from the cold.

“I have failed to mention many other brothers and sisters. When will this darkness created by the government come to an end? They are detaining our dearest people who have lost their personal freedom, but they will never be able to restrict our freedom of faith. We will triumph by relying on the Lord!” Zhang Shanshan said after discussing the detainees.

Zhang Shanshan said that before her father was detained, he had told her he missed her and that he wanted to see her as he prepared to be detained, which hints that Zhang Shaojie may have been suspicious of the government officials seeking to “meet” with him. She said her handicapped mother and elderly grandparents worry and pray every day.

It has been more than three weeks since the initial detainment of Zhang Shaojie and 23 other believers were detained, and the situation is worsening. The whereabouts of many church members are unknown, and authorities have not followed the proper legal procedures.

A few families have received notices that their loved ones have transitioned from criminal detention to arrest.

ChinaAid demands that the Nanle County Party Committee, county government and administrative departments follow the law and quickly correct their illegal conduct by releasing all detained Christians and returning to the legal system and dialogue to resolve the dispute. We pray for the believers in prison. May the Lord strengthen their will so that they never bow to evil.