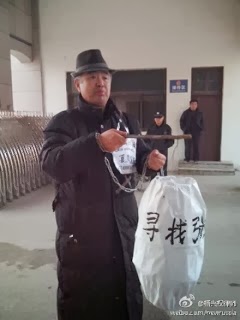 (Nanle County, Henan—Feb. 17, 2014) ChinaAid has obtained an official complaint and investigation request submitted to the Puyang Municipal People’s Procuratorate in central Henan province by the lawyers representing the nine Nanle County Christians who remain in detention.

The demands listed in the complaint are that the Puyang Municipal People’s Procuratorate investigate the criminal liability of Huo and Li and to supervise the Nanle County Public Security Bureau and the Nanle County Detention Center’s activity according to the law.

The document noted that many of the detainees’ families haven’t received detention or arrest notices from authorities.

The document, which can be read in full below, went on to list several more facts that the lawyers said demonstrated the need for investigation.

Matters to be addressed in the complaint:
1. We demand that the procuratorate investigate, pursuant to Article 251 and Article 397 of the Criminal Law, the criminal liabilities of Huo Peijing, who is suspected of illegally depriving citizens of their freedom of religion and of abusing the power vested in him.

2. We demand that the procuratorate investigate, pursuant to Article 397 of the Criminal Law, the criminal liabilities of Li Zhengjie, who is suspected of abusing the power vested in him.

3. We demand that the procuratorate implement its legal duty of supervision and issue a “Procuratorate’s Proposal” to the Nanle County Public Security Bureau and the Nanle County Detention Center, urging the two above-mentioned work units to safeguard, in accordance with law, the lawyers’ right to meet with their clients and their right to conduct investigations.

Facts and reasons:
We are the defense counsels of the detained Christians in Nanle Religious Case. Pursuant to Article 41 of the Chinese Constitution, we hereby submit our criminal indictment against Huo Peijing and Li Zhengjie, the related criminal responsible people.

On Nov. 16, there occurred, in Nanle County, Puyang city, a serious incident of persecution against Christian believers. Over 20 Christians were detained, and five of them have been officially arrested. Most family members of the detained and arrested people have not received the detention notices or arrest notices. The families of several detained and arrested people did not receive the notices until many days later.

Take Zhang Shaojie as an example: Since he was taken away from the church building, his family has never received notice from the Public Security Bureau. The authorities searched two of his residences, and three times out of four, they failed to notify Zhang’s family members to come to the scene. They never showed a search warrant. What is more serious is so far even his family does not know where Zhang Shaojie is detained. It is said that the authorities tried to extort a confession from him through torture. Zhang Shaojie’s parents, wife and his children worry about him a lot, especially his parents who are almost in their 80s. His father was so scared that he was hospitalized, and his mother lives in terror every day. His wife is handicapped, and every day she goes everywhere, limping to inquire about Zhang Shaojie’s whereabouts. What terrifies them the most is that they don’t know why their loved one is arrested, where he is detained and whether he is alive or dead.

After the Nanle Religious Case occurred, people in the general society have payed great attention to the case. Family members of the detainees have all hired lawyers to get legal assistance. After we got our authorization, we applied for meetings with our respective clients with the legal and complete paperwork. However, the director of Nanle Detention Center regards the law just as a game, and he deprives the lawyers of their rights to meet with their clients. This tramples on the dignity of the law, and it is also a serious act of malfeasance. Moreover, their reason in refusing to let the lawyers meet with their clients is more absurd. Pastor Zhang Shaojie’s defense counsel Lawyer Xia Jun came to Nanle 20 days ago, and he requested many times to meet with his client.

Each time, the detention center unreasonably refused to let him do so. So, Lawyer Xia went to negotiate with the Public Security Bureau, but the Public Security Bureau wouldn’t let him enter the gate. In all helplessness, Xia held a lantern with “Looking for Pastor Zhang Shaojie” painted on it as an artful protest against the violation of the law committed by Nanle Public Security Bureau and its detention center. When Yan Beibei’s defense lawyer Yang Xingquan requested to see his client, the detention center twice refused to let the lawyer meet with his client on the excuse of power outage. [Editor’s note: Xia Jun and Yang Xingquan went together to meet their clients and were turned away because of a power outage, see https://chinaaid.org/2013/11/more-governmental-obstacles-faced-by.html]

On Dec. 12, the 15 lawyers went to the detention center with appropriate documents, and once again we requested to see our clients. The director Li Zhengjie again refused to let the lawyers meet with their clients on the excuse that we need the approval from the leaders.

Pursuant to Articles 36 and 37 of Criminal Procedural Law of the People’s Republic of China, a detention center must make arrangements for the meetings between lawyers and their clients within 48 hours as long as the lawyers have the appropriate documents They don’t need the approval from the work unit in charge of the case.

In summary of the above, we hereby submit our bill of indictment, and we request that the procuratorate investigate this matter in accordance with the law.