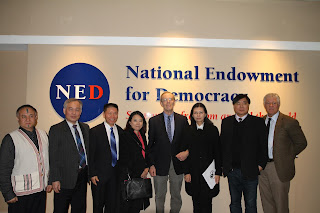 (Washington, D.C.—May 22, 2019) On the 30th anniversary of the Tiananmen Square Massacre, the National Endowment for Democracy (NED) will honor three organizations working for increased human rights and religious freedom in China with their annual Democracy Award, including ChinaAid, the World Uyghur Congress, and the Tibet Action Institute.

According to a media advisory released by the NED (link available below), the NED’s president, Carl Gershman, said, “‘The 2019 Democracy Award honors three groups who are working at the forefront of one of the most important human rights struggles of our time.’”

He added, “‘We know the history of China’s nearly 70 years of brutal repression in Tibet; and we are now seeing the increased persecution of Christians and the destruction of churches as part of an all-out campaign against religion in China. We honor these three groups that are fighting back against the CCP’s systematic crackdown aimed at erasing their identities and history, and for their resilient efforts to preserve their freedom of belief, their language, their culture, and their most basic rights.’”

The award ceremony will be held on June 4, exactly 30 years after the Chinese government enacted martial law against a group of pro-democracy student protesters gathered in Beijing’s Tiananmen Square, right outside of the Great Hall of the People, one of China’s most prominent government buildings. Military personnel opened fire on the civilians, killing an untold number of them. China has since tried to silence news of the massacre, even instituting media blackouts within the country immediately following it and annually harassing human rights and religious freedom proponents in the days leading up to its anniversaries, but it remains the most well-known of the country’s many human rights violations.

China’s human rights violations did not end in Tiananmen Square, however. To this day, millions of religious practitioners, activists, and political dissidents continue to be arrested, tortured, or otherwise harassed within the country. Among these are Christians, Muslims, Tibetan Buddhists, adherents to the spiritual practice Falun Gong, human rights lawyers, ethnic minorities, and people who oppose the rule of the Chinese Communist Party or support any persecuted individuals.

The award ceremony will take place in room HC-5 of the Capitol Building at 5:00-7:00 p.m. EST in Washington, D.C. The advisory states that speakers at the ceremony will include U.S. Representatives Mike McCaul and Joaquin Castro as well as House Republican Conference Chair Representative Elizabeth Cheney. Speaker of the House Nancy Pelosi may also speak, although her presence has not yet been confirmed.

Members of the press must register with the NED prior to attending these events by e-mailing [email protected].

For more information about the events and the Democracy Award honorees, please see the NED’s media advisory.

ChinaAid is honored to be a recipient of the Democracy Award and would like to thank the NED for its global and unwavering support of religious freedom and human rights.