We found out according to law that your behavior of organizing and holding Xunsiding Church religious activities in the Liuhong Hall of the Pan Pacific Hotel without the approval of the National Religious Affairs Bureau and providing for illegal religious activities violates the provisions of Articles 40 and 41 of the Regulations on Religious Affairs. According to Article 71 of the Regulations on Religious Affairs, this government organ plans to impose an administrative penalty of 200000 yuan [30,879.44 United States Dollars] on Yang Xiibo and Wang Xiaofei (100000 yuan on Yang Xibo and Wang Xiaofei respectively).

Shortly before the hearing scheduled for 9 am. Mrs. Wang posted the following prayer requests on her WeChat Moments:

1. Please pray that God will be with my husband and me during the hearing, and that God will give us the wisdom to present a good testimony for as well as glorify Him.

2. In this gigantic spiritual war, please pray for God to lead us to win, to crush the evil under His feet.

4. Please pray for God to use this crackdown to strengthen our church and bring more saved people into the Church.

During the hearing which lasted two and a half hours, as their lawyer could not attend due to the pandemic, Pastor Yang, and Mrs. Wang* had to defend themselves. After the hearing, Pastor Yang said,  “The hearing was went well, but the Religious Affairs Bureau does not plan to change anything.” 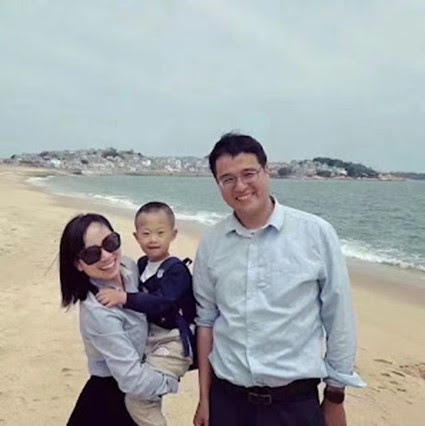 Pastor Yang Xibo’s family.
(Photo: ChinaAid resource)
During the hearing, Brothers and sisters of Xunsiding Church waited for Pastor Yang and Mrs. Wang outside the Religious Affairs Bureau. Smiling afterward, they photographed themselves together. Later, Mrs. Wang posted on her WeChat Moments:

The hearing lasted two and a half hours.

Thank you for your prayers. Regardless of the result—God won.

My prayer: “Lord, may all who love You be like the sun when it rises in its strength.”

###
Then the righteous will shine forth
as the sun in the kingdom of their Father.
He who has ears to hear,
let him hear!
~ Matthew 13:43 (NKJV)
China Aid exposes abuses in order to stand in solidarity with the persecuted and promote religious freedom, human rights, and rule of law. If you wish to partner with us in helping those persecuted by the Chinese government, please click the button below to make a charitable donation.