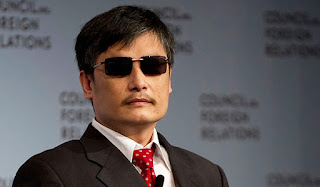 Not since the Olsen twins had something so big hit New York University. In May of last year, Chen Guangcheng arrived there from China. Now he is being asked to leave, and the question is, “Why?” Is it merely because his fellowship has expired? Or is he being forced out, because the university wishes to please Beijing?

Chen, recall, is the “blind peasant lawyer” who is one of the bravest people in the world. He blew the whistle on China’s forced abortions and sterilizations. He endured four and a half years in prison, being subjected to the usual horrors the state visits upon its political prisoners. Then there was a year and a half of house arrest, which included equal horrors. Last year, Chen and his wife, Yuan Weijing, escaped to the U.S. embassy. After about a month of negotiations, they were allowed to fly to America.

Chen’s main patron was Jerome A. Cohen, a veteran China scholar and law professor at NYU. The university was undoubtedly good to take Chen in. At the same time, the university got something out of the deal too: A genuine world hero was in its midst. Now there has been a bitter split.

Chen, for his part, says that NYU is forcing him out, bowing to pressure from China. NYU is in the process of building a Shanghai campus; it pays to be in the good graces of Beijing. NYU, for its part, says that Chen is talking nonsense, and ungrateful nonsense at that. Cohen, traveling in China, issued a statement: “No political refugee, even Albert Einstein, has received better treatment by an American academic institution than that received by Chen from NYU.”

It is hard to sort this out. What is not hard to sort out is that American universities, and American scholars, have been extremely cautious where China is concerned. And “extremely cautious” can be a polite way of saying “cowardly.” Chen Guangcheng addressed that very point in an interview with Jay Nordlinger, published in the June 17 issue of National Review. He said that American scholars of China are fearful of crossing Beijing, because it may mean the loss of their visas and other perks. These scholars “are not what we think of as persons of academic integrity,” said Chen.

Among China scholars, there are persons of integrity, though not as many as desirable. Nordlinger discussed them in a piece last summer, “Scholars with Spine: Notes from the Field of China Studies.” One scholar with spine is Perry Link, late of Princeton University, now at the University of California, Riverside. With Columbia’s Andrew Nathan, he coedited The Tiananmen Papers, a trove of documents regarding the protests and massacre of 1989. Both Link and Nathan have been banned from China.

Link used to run Princeton’s language program in Beijing. Princeton could have told the Chinese government, “Professor Link is our director. If you forbid him to enter the country, fine, but we will have to move our program to Taipei.” Instead, Princeton said, “Okay” — which is a pity. Prestigious American institutions, including universities, have more leverage than they think; that leverage goes unemployed.

Jianli Yang is Chen’s fellow dissident, and friend. In “Scholars with Spine,” Nordlinger wrote, “Yang says that he and other dissidents are not entirely comfortable at American universities. Link says that another prominent dissident recently told him the same thing. If you’re a dissident, says Yang, people may regard you as radioactive, a bit untouchable — as though they might catch a disease from you.”

Chen was an adornment to New York University. He was at least as special as Mary-Kate and Ashley Olsen. But he will not be out on the streets. According to reports, he is considering offers from two institutions: the Witherspoon Institute in Princeton, N.J. (which is not affiliated with the university there, by the way), and Fordham University in New York. Chen has a lot to offer. He tells the truth about the Chinese government, when others are afraid to.