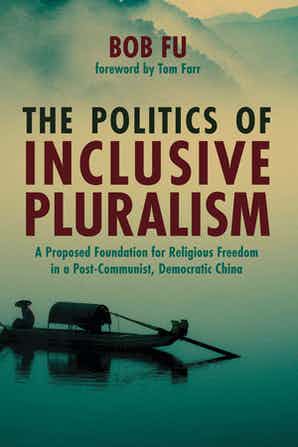 The Politics of Inclusive Pluralism:

A Proposed Foundation for Religious Freedom
in a Post-Communist, Democratic China
by
Bob Fu.

“Long live the red terror!” This and other political slogans were used by China’s communist rulers as leverage for conflict and conflict management during 1949. China’s Cultural Revolution movement understandably fueled anger, fear, and terror among Chinese citizens. Currently, contrary to the positive facade that China, under the control of the Communist Chinese Party (CCP), tries to project regarding human rights, a dark reality reveals a brutal authoritarian state with no concern for religious freedom.

What guiding philosophy could best help procure, provide, and protect religious freedom for all in a post-communist, Christianized, democratic China?

Bob Fu argues that while various Christianity-oriented theories may appear promising, they fail to provide an adequate pluralistic foundation for protecting the religious freedoms of people of all faiths and none. The predominant theory of political liberalism in the West likewise fails to prove sufficiently inclusive for all faiths and worldviews. As an alternative, the author defends Baorong Duoyuan (inclusive pluralism), his own contextualized theory modeled after principled pluralism. This model, he believes, has the potential to help ensure that religious freedom for all becomes a reality.

Bob Fu concludes from years of research he invested in developing Baorong Duoyuan,* his evolving theory in The Politics of Inclusive Pluralism…:

… Baorong Duoyuan emulates the message that the Golden Rule encourages—treat others the way one would want to be treated. Found in all cultures, religions, and worldviews, versions of the Golden Rule range from “those of ancient Egyptian religions to those of West Asia (Judaism, Christianity, Islam), South Asia (Hinduism and Buddhism) and East Asia (Confucianism). Non-religious worldviews such as those of the Council for Secular Humanism and the British Humanist Association” also sanction variations of the Golden Rule.

… I maintain that if Chinese citizens consent to implementing my theory as a vehicle for protecting religious freedom, they would find that Baorong Duoyuan, which aligns closely with international norms under a liberal constitutional framework, offers the most reasonable, consistent, and coherent guiding solution to help ensure their consensus.

… Citizens who have religious freedom need to tune in to the cries of “Help . . . Help? Help!” from those who do not. We not only need to listen to cries from those being persecuted for their religious beliefs in China and throughout our global community, we also need to do what we can to help facilitate religious freedom for all. Ideally, I believe that under Baorong Duoyuan, all religious, non-religious, and even anti-religious individuals and groups in a post-communist, Christianized, democratic China would realize that freedom.

And as ye would
that men should do to you,
do ye also to them likewise.
~ Luke 6:31
China Aid exposes abuses in order to stand in solidarity with the persecuted and promote religious freedom, human rights, and rule of law. If you wish to partner with us in helping those persecuted by the Chinese government, please click the button below to make a charitable donation.