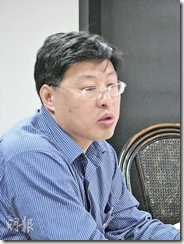 Liu Guan – Elder of Shouwang Church (Photo by Mingpao.com)
Lately, the ShouWang’s outdoor service event has caused hot debate inside and outside the church, and has brought great shock to each person who is involved. I believe that it has much greater impact and influence even than the outdoor service event and the purchase of the gathering place of ShouWang in 2009. In my opinion, ultimately, this event won’t have substantial influence on one’s work, life, school, career, and ministry, but it will have substantial influence on one’s inner spiritual life. It is a real spiritual warfare, and is not a game! It is too early to comment on this event since we are still in the process, but I do have some observations to share with you.
1. The great switch in the trajectory of Gospel proclamation in China: the development in the dynamics of target people group in evangelization
I come to this conclusion from analyzing the dynamics of the explosive development of evangelization among different people groups in China since the reform and opening up. This trajectory of Gospel proclamation can be pictured as: