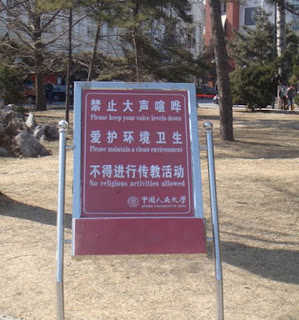 According to the revisions, which were announced by the Chinese state mouthpiece Xinhua News Agency, “Religious affairs maintenance should persist in a principle of maintaining legality, curbing illegality, blocking extremism, resisting infiltration and attacking crime.” However, Chinese officials often use “blocking extremism” as an excuse to crackdown on innocent Muslim populations in China’s western Xinjiang region and arrest Christians for contacting overseas individuals, since they believe foreign entities are using religion to “infiltrate” the country. In addition, many law-abiding religious practitioners have been persecuted by Chinese agents, who claimed they had committed trumped up crimes.

Chinese Premier Li Keqiang signed off on the new revisions on Aug. 26, and they are set to take effect on Feb. 2, 2018.

In response to these new regulations, ChinaAid founder and president Bob Fu said:

“This is by far the harshest and most restrictive religious policy the Chinese regime has issued on religious matters since the end of the Cultural Revolution,” said ChinaAid founder and president, Bob Fu. “It shows the Chinese regime will further tighten its total control on any unapproved religious organizations, such as independent house churches and religious activities, in the name of the ‘law.’ If implemented accordingly, all unregistered churches and their religious activities will be completely banned and subjected to severe, unprecedented punishment if found in violation. It specifically forbids any unauthorized religious training, schooling, or proselytizing. Even attending overseas religious conferences without approval will be banned by the political authorities; those who violate this rule will face a stiff penalty, including a fine ranging from 20,000-300,000 yuan. Those who provide venues such as homes, buildings, and offices will be persecuted with harsh administrative and criminal measures.

The revisions specifically target religious activities in the education sector.

Requiring approval from the provincial government authorities to build a church is a ridiculous stipulation!

I predict the regulations will fail miserably, since it will be difficult for the government to enforce it nationwide. As a result, Chinese independent churches will grow at a much faster pace.”

ChinaAid exposes abuses, such as those laid out by China’s new religious regulations, in order to stand in solidarity with the persecuted and promote religious freedom and rule of law.