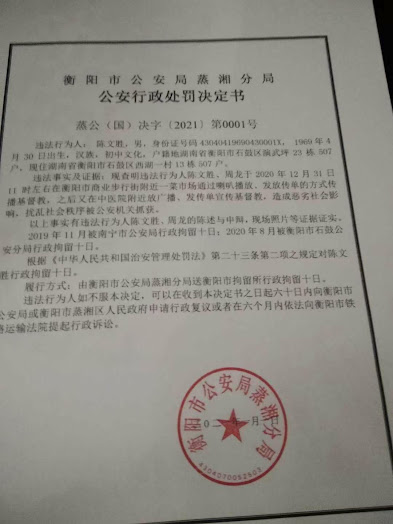 Despite police repeatedly arresting and detaining him, with his last 10-day detention starting August 3, Street Preacher Cheng continues to proclaim the gospel on the streets of Hengyang. Passionate about spreading the gospel, sometimes alone, at times with others, as he regularly preaches on streets throughout the busy city, he often holds a cross with the inscription: “Glorify the Lord. Repent, Trust, and Be Redeemed.”

Although CCP authorities repeatedly warn and threaten that they will arrest and detain him again if he continues to preach on the streets of Hengyang, Street Preacher Chen does not intend to give up holding his street evangelical events. Even if one day sentenced to prison, he has determined to still proclaim the gospel—even there.
###
Preach the word!
Be ready in season and out of season.
Convince, rebuke, exhort,
with all longsuffering and teaching.
~ 2 Timothy 4:2 (New King James Version)

China Aid exposes abuses in order to stand in solidarity with the persecuted and promote religious freedom, human rights, and rule of law. If you wish to partner with us in helping those persecuted by the Chinese government, please click the button below to make a charitable donation