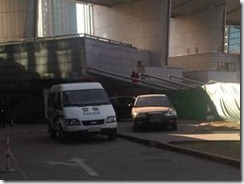 For the New Year, everyone had made their plans for how to ring in the first day of the first month of 2012. But for the brothers and sisters of Beijing Shouwang Church, it brought yet another disappointment. Everyone had been praying that, in the New Year, the government would allow them to worship indoors, so that they could have their own space to meet, to pray and to spread the Gospel. But on the first day of the new year, their hearts full of hope sank once again. 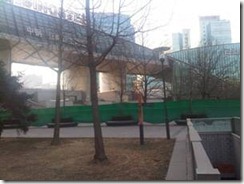 The brothers and sisters of Shouwang had no choice but to continue meeting outdoors on Jan 1st, 2012. The worship time was 8:30 a.m., so we rushed to the plaza [that had been Shouwang’s designated outdoor worship site], but unfortunately, at 8 a.m., the police had already taken into custody all the brothers and sisters who were making their way to the plaza. The plaza [was now] totally empty, with only one person in a red coat with a camera standing alertly in an inconspicuous corner looking as though he was ready to pounce. He photographed everyone in the plaza who passed by him. Police had used green tarp to enclose the entire plaza and block off all access to it, and several police vehicles were parked next to the plaza, their drivers waiting for arrests. We took a few cell phone photos, then walked the long way around to the Xin Dong Fang building next to the plaza, hoping to find a way through the building to the plaza.

At the reception desk on the third floor of the Xin Dong Fang building, there is a big glass door leading to the plaza, but the employees said that the one day that access through the door is not permitted is Sundays. We tried walking out to the plaza but were stopped by police lurking at the reception desk and questioned. During the questioning, we suddenly discovered that the man with the camera in the plaza had followed us to the reception center and was now standing nearby looking at us warily. We were not just very surprised to see him, we were stunned, never thinking that we had inadvertently become the targets of a tail. Seeing our surprise, the man in red walked away without a word. After he left, another man, wearing a black jacket, joined those sitting on chairs on either side of the glass doors. His eyes never left us until we left the reception desk area.

We trudged heavily and silently out of the building because we could feel that eyes were still on us. We didn’t know where we should go next, and we didn’t know how many people were tailing us. We had originally planned to visit a sister from Shouwang Church, but now we were worried that these undercover police would bring her trouble and danger. After some discussion, we squeezed into the great flow of people in the Zhongguancun computer market, hoping to get rid of the tails. Then we went into a nearby food court and a park, places that were crowded with people. Finally, in the afternoon, when we thought that we were no longer being followed, we contacted the Shouwang sister and went to her house for a visit.

According to this sister, police showed up the previous evening and stationed themselves at the door of her home, refusing to let her leave. She showed us some photos taken with her iphone of police on the ground floor of her apartment block. She told us that nearly 50 people had been taken into custody that morning, including Pastor Xiaofeng’s wife. We told her what had happened to us in the plaza in the morning and shared the testimony of [the brothers and sisters from the church in] Linfen, Shanxi province. The sister choked back tears and praised the Lord for guiding us and keeping us safe. But she also advised us to be careful because the state security apparatus would be particularly sensitive about people [like us] who had returned from overseas, and the severity with which they handle us would also vary.

From this [latest] incidence of the government not allowing Shouwang Church to move indoors, we can see that Shouwang Church had already made a concession and had taken the initiative in suggesting that it move indoors, even though it can’t take ownership of the property purchased with money donated by church members and even though it has to pay more money to rent another place. Shouwang was willing to accept all this all for the sake of showing its willingness to reach a compromise with the government and to negotiate. To be on the safe side, the church even rented three different places, but by the evening of December 31, all three sites notified the church that, because of interference and pressure from relevant [government] departments, they could not lease the space to the church and had no option but to tear up the agreement.

Many brothers and sisters were in tears, not only because they could not worship indoors, but because they saw the government’s unbending attitude, unwilling to give any ground at all and unwilling simply to sit down and talk, an attitude of not giving up until the death [of Shouwang].

Since December 31, China’s state security and domestic security have come out in force, as though facing a formidable enemy, and set up guard stations and imposed martial law at the plaza. Those brothers and sisters who had been to the plaza in the past have been confined to their homes by security guards at their doors blocking them from going out. The pastors who have been under house arrest have not been allowed to have visitors. According to knowledgeable sources, there’s been a substantive change of attitude within the state security apparatus, which has confirmed that there has been contact between the church and overseas forces, so they are determined label the church a cult. While on the one hand severely cracking down on the legitimate rights of Christians to worship, they are using all means available to try to find non-religious crimes [to pin on Shouwang], such as selling state secrets or using foreign forces to subvert the government. All for the sake of breaking up the church, until it is totally destroyed.

Psalm 23:4 — Even though I walk through the valley of the shadow of death, I will fear no evil, for you are with me; your rod and your staff, they comfort me.