The New York Times: Echoing Out of Texas, Chinese Voice of Dissent for Religious Freedom 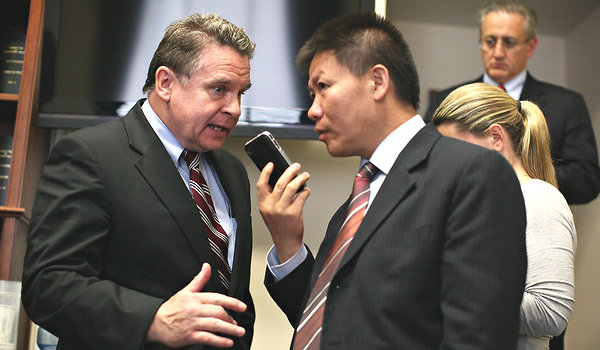 MIDLAND, Tex. — When the Chinese activist Chen Guangcheng stole the show at an emergency Congressional hearing this month by calling into the chamber during a live television broadcast, few people noticed who was holding the cellphone.

But those within the tightknit community of Chinese dissidents in the United States, and their supporters, immediately recognized the man, who had arranged for Mr. Chen’s voice to be carried to Washington directly from his Beijing hospital bed: Bob Fu, a Chinese-born pastor who operates out of a squat, whitewashed house opposite a Family Dollar store here in Midland.

“When it comes to contacts in China, Bob’s network can’t be beat,” said Representative Christopher H. Smith, Republican of New Jersey, who convened the hearing to put pressure on the Obama administration and help ensure that Mr. Chen, a self-taught lawyer, would be allowed to leave China with his family to study law in the United States.

If the drama over Mr. Chen’s fate has placed a harsh spotlight on China’s capacity for repression and created a diplomatic migraine for the White House, it has also been something of a boon to Mr. Fu, 44. His organization, ChinaAid, is at the crossroads of a growing movement among American Christians agitating for religious freedom in China and the wider dissident network inside the United States, as well as members of the underground church in China trying to practice their faith in a hostile environment.

The attention has also highlighted the increasingly defiant role that Chinese Christian lawyers, pastors and church members are playing in the struggle for human rights, including sometimes smuggling dissidents out of China when the heat on them becomes too intense.

But some critics say that Mr. Fu’s high-profile role as an advocate for religious freedom is a double-edged sword. It has raised awareness of human rights abuses. But his close association with Republicans and evangelical Christians, the critics say, risks stoking China’s fears that foreign forces are plotting to subvert the ruling Communist Party.

“Bob’s heart is in the right place, but sometimes in his zeal to bring attention to his cause he gets sucked up into the partisan maelstrom of Washington,” said one American human rights advocate who works closely with ChinaAid and spoke on the condition of anonymity because he did not want to offend Mr. Fu.

A soft-spoken former English teacher who fled China in 1997, Mr. Fu, whose Chinese name is Xiqiu Fu, has hit pay dirt here in the Permian Basin, a parched expanse of West Texas flatland that produces more than 15 percent of the nation’s oil and gas. Since a group of pastors invited him and his family to move here eight years ago, Mr. Fu has been embraced by Midland’s prosperous evangelical citizenry.

(This booming city is best known, perhaps, as the childhood home of President George W. Bush and his wife, Laura, whose portraits — posing with Mr. Fu — are generously spread around ChinaAid’s offices.)

In addition to bankrolling Mr. Fu’s $1.4-million-a-year operation, local residents serve on ChinaAid’s board, provide money for the families of jailed believers and finance a network of 30 defense lawyers who are willing to step into the lion’s den of China’s legal system to defend the persecuted.

“Bob has really educated us about the terrible things that are going on in China,” said Doug Robison, a third-generation oilman who is chairman of the Permian Basin Petroleum Association. “The message he conveys is pretty compelling.”

Mr. Fu, a frequent speaker at the city’s megachurches, rarely has to make the hard sell. During last month’s annual ChinaAid gala at the Midland Country Club, Mr. Fu said he was hoping to pull in $200,000. He left with nearly twice that amount.

“A few times a year, strangers walk into my office and write out $100,000 checks,” Mr. Fu said last week as he toggled between calls from a Christian radio station in Pittsburgh, a Japanese newspaper and Mr. Smith, the congressman.

ChinaAid’s growing profile on Capitol Hill and its prodigious mentions in the news media have drawn slings and arrows from some Chinese rights advocates who disparage Mr. Fu’s singular devotion to persecuted Christians. (Although it was his legal fight against forced abortions and sterilizations that got him into the trouble with the government, Mr. Chen, the lawyer, is not Christian.)

Others have criticized Mr. Fu as overly partisan, pointing to statements he made that accused the Obama administration of “abandoning” Mr. Chen and mishandling the episode in which the dissident — who had fled house arrest — left the safety of the American Embassy in Beijing only to reverse course and ask to leave China to visit the United States.

Mr. Fu says his close relationship with Republicans is partly a matter of pragmatism. Democrats, he said, are not always interested in his cause. “I’ve never tried to side with one party,” he said. “To do so would be a disaster for our movement.”

Indeed, many mainstream human rights organizations praise Mr. Fu’s mettle and say he does an admirable job juggling the demands of his evangelical backers with the broader causes of democracy and legal reform in China. “There is no single make or model for human rights activism,” said Sophie Richardson, the China director for Human Rights Watch. “As the environment in China has worsened, it’s all hands on deck.”

Jerome A. Cohen, a New York University law professor who arranged for Mr. Chen to receive a fellowship to attend N.Y.U.’s law school, said Mr. Fu was the rare example of a Chinese exile who has managed to stay relevant outside China. “Bob shows that if you come out young and flexible and with enough drive, you can make a difference,” Mr. Cohen said.

It is in part Mr. Fu’s personal story that makes him such a compelling advocate. The son of farmers from China’s northeast, he led classmates at Liaocheng University to join the 1989 pro-democracy protests in Tiananmen Square.

It was after the army violently quashed the demonstrations and Mr. Fu was hauled in for interrogation that he had his crisis of faith. The tipping point, he said, was betrayal by the university president, his mentor, and the classmates who implicated him to save themselves.

One night Mr. Fu devoured a book, smuggled in by a foreign Christian teacher, about the redemption of an opium addict who went on to establish a drug-treatment center. “I realized only the supernatural power of the Holy Spirit could help me,” he said.

Redeemed by writing countless self-criticisms, Mr. Fu escaped serious punishment and eventually moved to Beijing, along with Cai Bochun, a fellow student he later married. They started a small house church — an unofficial congregation outside state control — even as Mr. Fu landed a job teaching English at the Communist Party’s central school.

The incongruity of working by day for an officially atheist government and preaching the Gospel by night was not lost on him. “I was God’s double agent,” he likes to say with a shy smile.

In 1995, the police discovered the clandestine congregation and Mr. Fu and his wife were taken into custody. Their two-month detention was marked by long interrogations and 10- to 15-hour days during which, Mr. Fu said, he was forced to sit with his arms and legs held upright. If he faltered, he said, other prisoners would beat him. “I got quite good at not moving,” he said.

Soon after their release, the couple began planning their escape. Ms. Cai was two months pregnant but lacked a childbearing permit from family planning authorities, which Mr. Fu feared could lead to a forced abortion. “We saw it happen to some of our friends,” he said.

A former student working for the public security bureau warned Mr. Fu of his impending arrest. To evade their minders, Mr. Fu jumped from a bathroom window and Ms. Cai slipped out in disguise. They made their way to the countryside, where a Christian policeman took them in. Later, another believer, the owner of a state-run travel agency, arranged for the passports and paperwork that allowed them to escape to Hong Kong.

In the summer of 1997, after an eight-month wait, the couple received political asylum from the United States. The Fus and their newborn son settled in Philadelphia, and Mr. Fu attended Westminster Theological Seminary. ChinaAid was born in his garage.

These days, the group has five employees and an army of volunteers. In China, Mr. Fu’s devoted network of friends and sympathizers has spread. Over the years, it has secretly ferried a dozen people out of the country, including Mr. Fu’s 70-year-old father, who had been brutalized by the police in retaliation for his son’s activities. Mr. Fu’s most recent rescue was Li Jun, a Chongqing property developer who says he was tortured by officials seeking to appropriate his business.

The group’s tenacity and organizational prowess have alarmed the Communist Party, and officials appear to be especially vexed by Mr. Fu.

“I’m happy to meet with them,” Mr. Fu said, referring to feelers he has received from high-level security officials. “I’ll meet them almost anywhere,” he added. “Just not in China.”