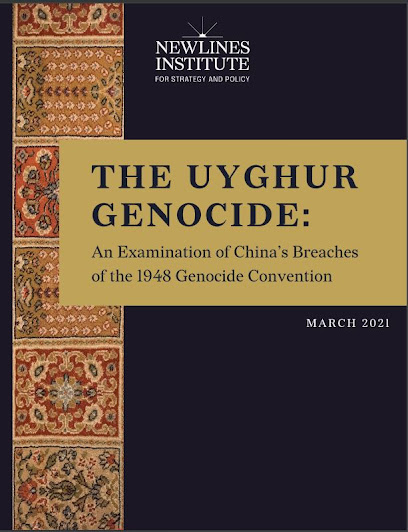 (Washington D.C.—March 10, 2021) On March 9, Newlines Institute released its March 2021 report which presents documented evidence that China bears State responsibility for breaches of the 1948 Genocide Convention. Details include emerging accounts of serious, shocking, systematic atrocities particularly targeting Uyghurs, an ethnic minority, as well as how China’s treatment of the Uyghurs and other minorities equate to genocide.

Excerpts from the Newlines Institute report:

The resulting report is a presentation of the facts that could be established together with careful analysis of whether China bears State responsibility for breaches of the Genocide Convention. …
VII. Conclusion
This report examined the legal question of whether China bears State responsibility for
breaches of Article II of the Genocide Convention, in particular, whether China is
committing genocide against the Uyghurs as defined by Article II of the Convention. Upon
application of the said provisions of the Genocide Convention to the mass of evidence
presented herein, this report concludes, based on a clear and convincing standard of
proof, that China is responsible for breaches of each provision of Article II of the
Convention. The definition of genocide is met under Article II when any of the
enumerated acts are committed with the requisite “intent to destroy, in whole or in part,
[the protected group] as such.” The object of this intent is the destruction of the group’s
existence as an entity as such.
The intent required by the Convention is measured by
objective standards, including official statements, policies, a general plan, a pattern of
conduct, and repeated destructive acts, which have a logical sequence. In this context,
the Head of State, President Xi, launched a “People’s War on Terror” in the region and
made the Uyghur-concentrated areas the front line, arguing that extremism has taken
root in Uyghur society. Camp guards reportedly follow orders to uphold the system in
place until “Kazakhs, Uyghurs, and other Muslim nationalities, would disappear … until all
Muslim nationalities would be extinct.”
High-level officials gave orders to “round up
everyone who should be rounded up,” “wipe them out completely … destroy them root
and branch,” and “break their lineage, break their roots, break their connections and
break their origins.” Officials have likened the mass internment campaign to “eradicating
tumors” and even uprooting weeds hidden among crops, which require spraying
“chemicals to kill them all.”
… China’s policies and practices in the region must be viewed in their totality, which amounts to an intent to destroy the Uyghurs as a group, in whole or in part, as such. While commission of any one of the enumerated acts will sustain a finding of genocide, the evidence presented here supports a finding that genocide is being committed against the Uyghurs, an ethnic group with protected status, under Article II paragraphs (a) through (e).

First, under the mass internment drive, there are reports of mass death and deaths of prominent Uyghur leaders who have been selectively sentenced to death by execution or, for elders in particular, by long-term imprisonment, such as 15 to 20 years in prison. These State-sanctioned deaths under the framework of the mass internment of Uyghurs in the region amount to “killing members of the group” under Article II (a).

Second, Uyghurs are suffering from systematic torture and cruel, inhumane, and degrading treatment, including rape, sexual abuse, and public humiliation, both inside and outside the camps. Internment camps are designed with built-in interrogation rooms, where consistent forms of torture against Uyghurs are well-documented. The Government homestays, mass internment, State-run orphanages, and forced labor schemes are each designed to indoctrinate and “wash clean” brains, driving Uyghurs to commit or attempt suicide from the threat of internment or the daily extreme forms of physical and psychological torture within the camps, including mock executions, public “self-criticisms,” and solitary confinement. China is therefore responsible for “causing serious bodily or mental harm to members of the group” as per Article II (b). 50

Third, Chinese authorities have systematically detained Uyghurs in unliveable conditions, particularly men of childbearing years, household heads, and community leaders, imposed birth prevention measures on Uyghur women, and transferred Uyghurs into forced physical labor. In sum, China is deliberately “inflicting on the group conditions of life calculated to bring about its physical destruction in whole or in part” as per Article II (c).

Fourth, China is carrying out a well-documented, State-funded birth prevention strategy targeting all women of childbearing age in Uyghur-concentrated areas with mass sterilization, abortions, and IUD placements. In 2019 alone, the Government planned to subject at least 80 percent of women of childbearing age in Southern XUAR to sterilizations or IUD placements. In the camps, female Uyghur detainees are subjected to forced IUD insertions, abortions, and injections and medications halting their menstrual cycles. The mass internment campaign supplements the XUAR Health Commission’s campaign of reducing Uyghur births by selectively imprisoning Uyghurs of childbearing age, depriving them of the ability to reproduce. As a result of these interconnected policies, Government statistics demonstrate that growth rates in Uyghur-concentrated areas are increasingly approaching zero. China is therefore clearly responsible for “imposing measures intended to prevent births within the group” as per Article II (d).

Finally, as Uyghur parents are increasingly detained in internment camps and forced labor
facilities, Uyghur children are being sent to State-run orphanages and raised in Chinese language environments with standard Han child-rearing methods. China is thus “forcibly
transferring children of the group to another group,” as per Article II (e) of the Genocide
Convention.
The persons and entities perpetrating these acts of genocide are all State organs or agents
under Chinese law, acting in their official capacities, or under the effective control of the
State. The nature of these interconnected and composite acts inescapably demonstrates
the clear, effective, and firm control of the State, which cannot reasonably be attributed
to others beyond the effective control of the State, to accident, or to chance. In terms of
the Genocide Convention, the long-established, publicly and repeatedly declared,
specifically targeted, systematically implemented, and fully resourced policy and practice
of China toward the Uyghurs is inseparable from “the intent to destroy” the Uyghurs as a
group, in whole or in part, as such.
Therefore, China bears State responsibility for an
ongoing genocide against the Uyghurs, in breach of the Genocide Convention.

The Uyghur Genocide: An Examination of China’s Breaches of the 1948 Genocide Convention
###
…the Lord hates…
A proud look,
A lying tongue,
Hands that shed innocent blood…
~  Proverbs 6:16-17 (NKJV)
China Aid exposes abuses in order to stand in solidarity with the persecuted and promote religious freedom, human rights, and rule of law. If you wish to partner with us in helping those persecuted by the Chinese government, please click the button below to make a charitable donation.