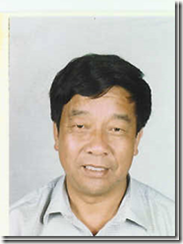 Monday, September 19, 2011 (7:07 am)
By BosNewsLife Asia Service
BEIJING, CHINA (BosNewsLife)– China has unexpectedly released a prominent house church leader from prison amid international concerns about his health, his family and rights activists confirmed Monday, September 19.
Pastor Zhang Rongliang, who leads the 10-million strong China for Christ Church network, was released nine months early on August 31 and allowed to return to his home near Zhengzhou, the provincial capital of Henan province, said advocacy group China Aid Association (CAA).
Zhang, 61, was detained in December 2004 and sentenced to 7.5 years imprisonment in July 2006 for “attaining a passport through cheating” and “illegal border crossing.”
Supporters claimed the real reasons for his imprisonment were his Christian activities and nationwide network of house churches, who operate outside the state-backed denominations.

He had traveled internationally, including to the United States, Australia, Egypt and Singapore, to attend world mission conferences, Chinese Christians said.
FAMILY REACTS
In published remarks his family said he is ” in good spirits and” and added they “thank everyone in the international community who has worked for his release since 2006.”
Yet, religious rights group Christian Solidarity Worldwide (CSW) expressed concerns about his health.
CSW said the pastor suffers from diabetes. Additionally, “He was tortured and ill-treated during previous detentions, leaving him in a poor state of health.”
Pastor Zhang was jailed on six separate occasions and has spent over 18 years in prison, Christians said.
MORE DETENTIONS
His release comes at a time when other house church leaders are under pressure. Pastor Shi Enhao, deputy chairman of the Chinese House Church Alliance, was sentenced to two years’ re-education through labour last month for “organizing illegal meetings,” trial observers said.
Additionally, leaders from the independent Shouwang Church in Beijing remain under house arrest.
Shouwang members have tried to meet outdoors every Sunday since April 11, after government officials repeatedly denied them access to a permanent worship place.
Over 600 Shouwang Christians have reportedly been detained since April, including 15 on August 28 and 12 arrests on September 4.  Police detain Christians, some of them traveling for hours, often before the service starts and typically free them within 24 hours.
HOUS ARREST
CSW also expressed concerns about Fan Yafeng, a house church leader and expert in constitutional law, who it said has been held under house arrest at his home in Beijing since December last year.
In the past year there has been an increase in the use house arrest, “to silence dissidents,” CSW complained.
Chinese authorities have reportedly said they will give police power to detain individuals in locations other than designated detention centers. Essentially legalizing house arrest under Chinese law, the new powers would undoubtedly lead to an increase in detention without trial, said CSW’s Special Ambassador Stuart Windsor.
“CSW welcomes the early release of Pastor Zhang, while calling for the rights of all Chinese citizens to practice a religion of their choice to be respected.” Windsor said his group wants the international community “to urge China to release immediately those detained for their religious beliefs, including those held under house arrest.”
Chinese officials could not immediately be reached to comment on the detentions and release. However the China’s government has denied human rights abuses, saying Christians are free to worship within the official denominations.
Rights groups say many of China’s up to 130 million Christians prefer to worship in house churches, outside the control of the country’s Communist government.
Copyright 2008 BosNewsLife. All rights reserved. This material may only be published, broadcast, rewritten, or redistributed by those sponsoring BosNewsLife for $10/month and/or with our prior written consent.
http://www.bosnewslife.com/18260-news-alert-china-frees-prominent-house-church-leader-others-detained