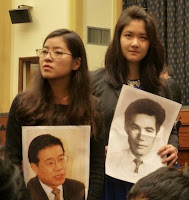 
(May 27, 2015) Ti-Anna Wang, daughter of imprisoned democracy activist and China 18 member Dr. Wang Bingzhang, is urging global leaders to assist in obtaining her father’s release from a Chinese prison in time for her wedding in July.

Wang Bingzhang, who co-founded the Chinese Democracy Justice Party in 1998, has been in prison since 2002 when he was abducted from Vietnam by Chinese secret police. He is serving a life sentence for espionage and terrorism charges.

Ti-Anna began advocating for the release of her father and other prisoners of conscience like him in 2008. Recently, she sent letters calling for Canadian Prime Minister Stephen Harper and President Obama to advocate for her father’s freedom.

A coalition of nine non-governmental organizations representing interests in human rights and democracy advancement in China created a petition campaign in response to Ti-Anna’s letters to Harper and Obama in a call for support of the letters and to facilitate global pressure for Wang Bingzhang’s release.

The petition, which aims for the reunion of Ti-Anna and her father at her wedding, includes a letter Wang Bingzhang wrote his daughter in 2012: “… Did you know who, according to Christian tradition, is suppose to hold a bride’s hand before giving it to her groom? A father. As I write this, [I] cannot hold my tears back. I so hope that when the time comes for you to marry, I can play the role of hand holder.”

Prisoners of conscience, unfortunately, miss important events in their families’ lives, such as weddings, graduations and other personal triumphs and tragedies. China Aid provides various types of aid to family members of prisoners of conscience in order to ease the absence left by the prisoner and to aid in efforts to secure their unconditional release.