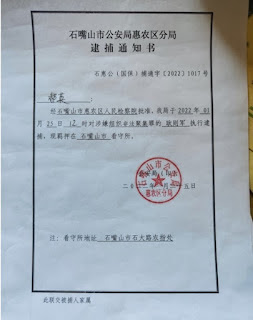 (Yinchuan, Ningxia province—June 8, 2022) Mrs. Hao Ying, wife of preacher Geng Zejun, published on social media that a trial will be held against her imprisoned husband at the end of June. Panshi church is a house church in Huinong District, Shizuishan. The church was raided during its Sunday service on December 5, 2021. The preacher Geng Zejun was administratively detained first and then criminally detained under the charge of “organizing illegal gatherings”. He has been detained in the Shizuishan Detention Center for more than half a year. On May 18, his lawyer traveled to Shizuishan and met with Mr. Geng and the judge. The judge told him the trial is planned for the end of June.

According to the lawyer, preacher Geng Zujun is a close friend of renowned Chinese Christian Wu Weizun. Mr. Wu was imprisoned for twenty years because he refused to renounce his Christian faith. He got out the prison on May 28, 1987. After he died, Mr. Geng arranged his funeral. The lawyer referenced the following Bible verses:

(Hebrews 12:1) Therefore, since we are surrounded by such a great cloud of witnesses, let us throw off everything that hinders and the sin that so easily entangles. And let us run with perseverance the race marked out for us,

(1 Peter 3:14) But even if you should suffer for what is right, you are blessed. “Do not fear their threats; do not be frightened.”

On December 5, 2021, at around 2 PM, police officers and national security agents from Huinong District Public Security Bureau raided Panshi church during its Sunday service. Older Christians were asked to write down personal information and leave. Authorities took the others to the police station for interrogation. The following day, preacher Geng Zejun was administratively detained for 15 days under the charge of “disturbing social order.” Mrs. Hao Ying, Luo Shiping, Ye Ningfang, Zhu Junying, and Wang Sufang were administratively detained for ten days and released on bail.

Since September 2021, Geng Zejun, Hao Ying, Luo Shiping, Ye Ningfang, Zhu Junying, and Wang Sufang were involved in illegal gathering multiple times in the name of Christianity. On December 5 at around 2 pm, we arrested Geng Zejun, Hao Ying, and Wang Sufang during their illegal gathering. We also arrested Luo Shiping, Ye Ningfang, and Zhu Junying from their homes on the same day. Their behavior has severely disturbed social order. We decided to give Geng Zejun a 15-day administrative detention based on item 1 and item 2 of article 23 of the “Public Security Administration Punishment Law of the People’s Republic of China.”

Police summoned Geng Zejun again the next month, releasing him fifteen days later. When his family called the police station, they were told he had been criminally detained on suspicion of “organizing and funding illegal gatherings.” Authorities formally arrested Geng on January 25 under the charge of “organizing illegal gatherings”. Currently, he is detained in the Shizuishan Detention Center.

Hao Ying asked fellow Christians to continue to pray for her husband and two other Christians, Luo Shiping and Wang Sufang, who were indicted under the same charge.