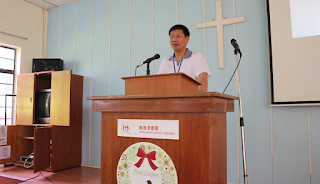 (Kunming, Yunnan—Aug. 19, 2019) The mother of North Carolina Pastor John Cao received word that her son is being held in Kunming Prison of Yunnan Province, located in the capital of Yunnan.


Cao, who is serving a seven-year sentence on a charge of “organizing illegal border crossings,” has been in custody since March 2017. At that time, he and his coworker, Jing Ruxia, were seized by Chinese officials while attempting to cross the Myanmar-China border, something Cao did often as part of his mission work building schools for impoverished minority children. The officials, however, had not taken any previous actions, causing his supporters to believe he was targeted for his faith.

Today, authorities phoned Cao’s mother and informed her he had been moved to Kunming Prison Yunnan.

Cao, a resident of North Carolina, is married to American citizen Jamie Powell. Powell and the couple’s two sons are currently living in the United States.