NYT: Chinese and Syrians Are in Prayers of the Pope 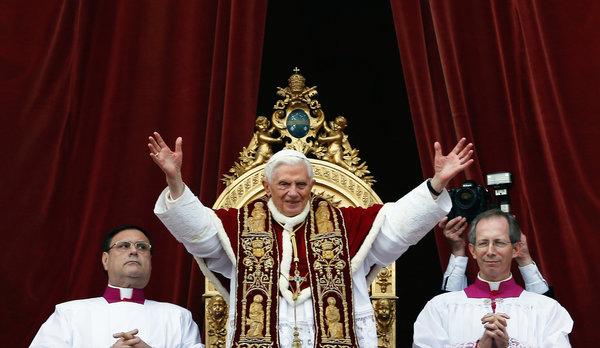 ROME — Speaking from the balcony of St. Peter’s Basilica, Pope Benedict XVI called on Tuesday for religious freedom in China and peace for the “defenseless” in Syria in his Christmas message.

“May peace spring up for the people of Syria, deeply wounded and divided by a conflict which does not spare even the defenseless and reaps innocent victims,” Benedict said. “I appeal for an end to the bloodshed, easier access for the relief of refugees and the displaced, and dialogue in the pursuit of a political solution to the conflict.”

Wearing a short red cape lined with white ermine and trimmed with gold embroidery, Benedict smiled as he offered Christmas greetings in 65 languages to thousands in St. Peter’s Square. Bands from the Italian armed forces and the Carabinieri police played festive anthems. During Christmas Eve Mass, the 85-year-old pontiff appeared tired and his voice hoarse, but on Tuesday he seemed more energetic as he delivered the traditional message, “Urbi et Orbi,” to the city and the world.

He also addressed China, where in recent weeks the Vatican has been increasingly at odds with the government over the ordination of bishops, who cannot hold office without approval from the authorities, to the dismay of the Vatican.

“May the King of Peace turn his gaze to the new leaders of the People’s Republic of China for the high task which awaits them,” Benedict said. “I express my hope that in fulfilling this task, they will esteem the contribution of the religions, in respect for each, in such a way that they can help to build a fraternal society for the benefit of that noble people and of the whole world.”

Aggravating tensions, the Chinese Catholic Bishops Council, a government entity, stripped Thaddeus Ma Daqin, 45, the auxiliary bishop of Shanghai, of his title this month, according to Catholic Web sites that cited sources in the Chinese church.
The bishop had been under house arrest since he shocked Communist Party officials and his faithful by renouncing his government position during his consecration in July. In recent years, the Chinese Patriotic Catholic Association, which does not recognize the authority of the pope, has consecrated a number of bishops over the Vatican’s objections, resulting in their excommunication.

Benedict also addressed the Israeli-Palestinian conflict in his Christmas message, asking God to give the antagonists the “courage to end long years of conflict and division, and to embark resolutely on the path of negotiation.”

A version of this article appeared in print on December 26, 2012, on page A10 of the New York edition with the headline: Chinese And Syrians Are in Prayers Of the Pope.