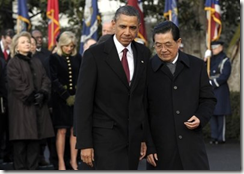 While calling for collaboration during a state arrival ceremony at the White House, Obama stated, “History shows that societies are more harmonious, nations are more successful, and the world is more just, when the rights and responsibilities of all nations and all people are upheld, including the universal rights of every human being.”
His speech comes amid pressure from advocates, victims and policymakers who have urged him to broach the subject of China’s many human rights concerns during Hu’s four-day state visit.
Reps. Chris Smith (R-NJ) of the House Foreign Affairs Committee and Frank Wolf (R-Va.) were critical of the president’s decision to host a state dinner for the Chinese leader.
“The Chinese government has done little in past 13 years, almost nothing quite frankly in the past 13 years to deserve the honor of a White House State dinner,” said Wolf on Tuesday.
Smith agreed that meetings with leaders like Hu are important, but stated that the president would have been better served holding a “working lunch” where he could address the leader’s gross endorsement of civil liberties violations.
Both House leaders and several human rights groups and victims detailed those violations during a Washington, D.C. meeting in hopes of nudging business discussions planned for Wednesday in a different direction.
Bob Fu, president of the China Aid Association, stressed, “Human rights, religious freedom should be treated as important as the economic and the interests.”
Fu, a former political prisoner, urged Obama to “change course” and discuss Chinese abuses of Uyghurs and house church Christians. He reminded the audience of several jailed outspoken advocates, including Uyghur Christian Alimujiang Yimiti who is still serving a 15-year sentence since 2009, for holding an underground independent church.
Alimujiang is not the only Christian being punished for hosting non-government sanctioned churches.
According to Wolf, government persecution of house churches persists. Pastors of those churches and Catholic bishops are often jailed and kept on house arrest, he reported.
“Chinese authorities continue to crack down on Protestant house church Christians, on Catholics,” noted Wolf.
Fu warned that continued silence on these abuses will “do more harm to this country and the world at large.”
The Chinese authorities also continue to jail and torture human rights advocates as well. Just last week, The Associated Press published Gao Zhisheng’s account of secret imprisonment and constant beatings. Gao recounted the experience to the AP in April 2010 and told them to only print the piece when he either reaches “some place safe” or goes missing.
Gao’s wife, Geng, says no one has heard from him in months. A grief-stricken Geng told the audience at the Rayburn Building that her daughter attempted to commit suicide twice because of Gao’s frequent imprisonment.
Gao is one of China’s most famous lawyers and human rights activists. He was abducted and imprisoned in 2007 and again February 2009. Each time he resurfaced and shared his story of constant beatings and torture with the media. Gao disappeared again in April 2010. It is believed that he again is being secretly held in a Chinese prison.
Geng is looking to God to grant his release and help reunite her family.
“I hope that God can help us to bring my husband home and help our family and help my daughter and my son be comforted,” she prayed.
The delegation also spoke out against the one-child rule which advocates said leads to forced abortions and fuels the sex trade. Chai Ling, a student leader during the Tiananmen Square demonstration, reported that forced abortion is a constant reality in China.
“As we gather here today in the U.S. Capital, over 35,000 forced and coerced abortions are taking place in China,” testified Ling, now the founding president of the humanitarian non-profit All Girls Allowed.
Reggie Littlejohn of Women’s Rights Without Frontiers recalled stories of women who were eight and nine months pregnant being forced to have abortions, women dying during the procedure and baby girls being killed at birth.
Both Littlejohn and Chai expressed that Hu’s visit is an opportunity to shine an international spotlight on this policy. “Let this week be the week that the world see this crime too,” she prayed.
All of the attendees on Capitol Hill echoed that sentiment and urged President Obama to use this opportunity to hold Hu accountable.
Obama began talks with Hu on Tuesday with a private dinner. Today, the two are scheduled to hold talks on trade between the two countries and economic policies before tonight’s formal dinner. Aides say that Obama will address human rights concerns.
However, Rep. Wolf has urged Obama to do more than make private mention of the issues mentioned here.
“I urge President Obama to raise the issues of human rights and religious freedom, not just behind closed doors but in his public statements as well,” proclaimed Wolf.
http://www.christianpost.com/article/20110119/obama-mentions-human-rights-with-chinas-hu-amid-pressure/