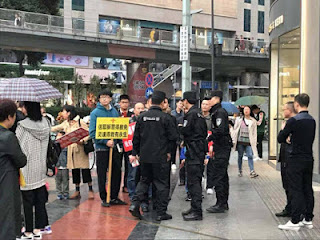 (Chengdu, Sichuan—Jan. 4, 2018) Since officials rounded up around 160 members of Early Rain Covenant Church in December, the church’s congregants have undergone abuse at the hands of the authorities.

When police conducted a mass arrest of the Chengdu-based church, Wang Jun, one of the Christians who attends services at Early Rain Covenant Church, tried negotiating peacefully with the police. In response, the officers attacked him, injuring his head, knees, and toes. Wang was also recently detained after he organized a Sunday worship event at the side of the Funan River. Police shut the service down.

In custody, Wang has been beaten violently, and he was sentenced 14 days in prison after undergoing an investigation that lasted for more than 30 hours.

Wang’s wife, Tang Shuangfei, was also arrested, along with his one-year-old child.

Other arrested Christians reported the police hit and trampled them. One of the Christian men had his arms bound and was imprisoned at midnight. From the abuse, his legs bled, and he sustained many injuries. Another said the police refused him food and water during his 24-hour detention. Instead, they bound him to a chair, and he was only able to sleep for a few hours that night.

On Dec. 20, the police inspected the home of one of the church’s elders, Su Bingsen. Su and others detainees associated with the church have been denied their right to meet with lawyers, and there is no way for the church to know whether or not the people have been treated humanely.

Nearly 700 congregants have been monitored, tailed, and threatened by local authorities, and two people have been beaten or hurt. In addition, equipment belonging to the church has been confiscated.

Despite these hardships, the remaining church members often gather in each other’s homes to host services, but they have been severely harassed. The local government dispatched numerous personnel to monitor their apartment buildings and follow them if they go out. They also stop friends from visiting them, and the officials repeatedly tell the Christians that they risk criminal detention on a “provoking troubles” charge if they continue to meet.