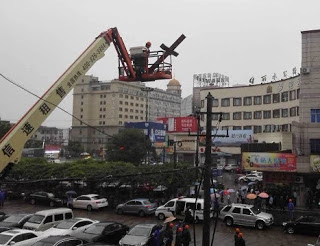 Guangcai Church, located in Nanyang, Henan, was stormed by a few dozen uniformed officers from the Guangwu Police Station and plainclothes personnel from the neighborhood committee, community committee, and property management office on Sept. 5 at 6:00 a.m. They removed the church’s cross and desks, chairs, and studio equipment. Some of the Christians came to stop them, but many were taken away by the police.


The same morning, government agents in other areas invaded Hui Xiaoying Church, Qiupo Church, and Jinglou Church without displaying their ID cards and destroyed church equipment, taking some of its property as well. Some of the Christians, who were intending to stop the authorities, were beaten.

At Jinglou Church, multiple church members were taken away, and the officials destroyed the kitchen in an attempt to drive out some of the congregants.

About 300 Christians were involved in trying to stop the authorities’ raid, but the officials punched some of them, closed off the streets, and blocked the local cell phone signal. When they managed to enter the church, they took all of its possessions.

One of the church’s attendees said, “We have learned that some people were injured and taken away [to the police station], but no details about them are available. Also, we don’t know the specific number of the arrested.”

The day before, two Christians, Yang Liupei and Wei Jindang, were detained by the Tanghe County Public Security Bureau and charged with “picking quarrels and provoking troubles” because they posted a piece condemning Henan’s persecution of Christians.

Yang was sentenced to 13 days in jail. His administrative punishment verdict says that he lashed out against the government’s methods of governing rural churches by rule of law and intentionally distorted the Communist Party’s religious policies and assaulted workers from the government’s religious management departments.

The clampdowns on these churches came as part of an ongoing movement to restrict Christianity throughout Henan.

ChinaAid exposes abuses, such as those suffered by Henan Christians, in order to stand in solidarity with the persecuted and promoting religious freedom, rule of law, and human rights.