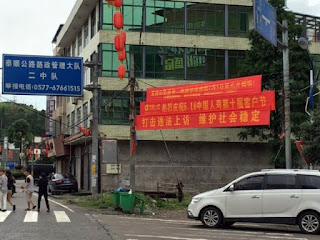 (Wenzhou, Zhejiang—June 30, 2016) Authorities in China’s coastal Zhejiang province postponed the trial of five Christians detained for defending their rights after their defense attorney called for 17 witnesses. The court hearing was originally scheduled for today.

The five Christians, including Ji Qingcao, attend Yazhong Church in Wenzhou. On Sept. 25, 2014, officials dispatched a demolition team to destroy the church’s cross, but the church members resisted them. Government personnel detained many of them at the scene and over the following months. After being released, they traveled to Beijing to petition higher authorities, but were detained again.

Additionally, their county now displays banners that denounce “illegal petitioning,” and the local government issued a document on June 15 that encouraged people not to petition. The banners also mandated that all citizens who organized or instigated such “social disturbances” turn themselves in to the police within a month.

Originally scheduled for June 30, the trial was postponed because Li Guisheng, the defense attorney, requested 17 witnesses, including three policemen, four police assistants and a local Party Secretary and administrator.

China Aid will continue reporting on this case as additional information becomes available.

China Aid reports on abuses, such as those experienced by the members of Yazhong Church, in order to promote religious freedom and rule of law in China.