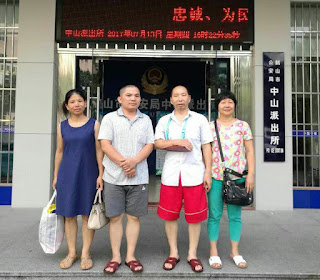 (Jiangmen, Guangdong—Oct. 19, 2018) Li Wanhua, the pastor of Fengle Church in China’s southern Guangdong province, had left his phone at home when the police called on Oct. 12.


“He went out and did not bring his cell phone,” his wife told them when they called again. When Li returned home, he called them back five times, but no one answered.

That same morning, they arrived at his residence and told him that he should take his cell phone and ID card and come to the Xincheng Police Station for questioning. Before he went, Li said, “Please pray for me, asking that the Lord give me wisdom and strength so that I can overcome persecution and Jesus Christ will be glorified!”

At around 4:00 p.m. on the same day, he was allowed to return home. One of the church members said, “He was questioned for more than one hour. It was about church related things, but the details are not available yet.”

This is not the first time Li has been questioned, however. On Nov. 9, 2017, multiple police officers invaded his home, confiscated Bibles, hymnals, and other religious items, and questioned him for nearly four hours. They ordered the church’s regular services canceled and threatened to shut it down if the members did not comply.

Prior to that, the Heshan Municipal Public Security Bureau detained Li along with one of the church’s attendees, Ruan Haonan, on false charges of “sabotaging law enforcement by organizing heretical cult organizations and using superstition” in June 2017 but released them on a year’s-long bail, during which they were required to report to the public security bureau every three months and obtain permission before traveling.

Fengle Church is an unregistered church, also known as a “house church,” that has been ordered to join the state-run and censored Three-Self Church network, but the members have refused. Chinese religious regulations allow for officials to close churches that refuse to join and persecute their leaders, but this violates the Chinese Constitution, which states that Chinese citizens have freedom of religious belief in Article 36.

ChinaAid exposes abuses, such as those suffered by the members of Fengle Church, in order to stand in solidarity with the persecuted and promote religious freedom, human rights, and rule of law and urges China to honor its own constitution by providing its citizens with religious freedom uninhibited by the law.