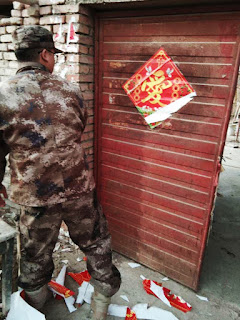 Wang Guoqun, a local Christian, had pasted couplets containing the Chinese character “love” and a cross. It is common for Chinese people to post couplets, or red banners typically containing poetry, around their doors. Local officials are forcing Kazakh and Uyghur residents to buy couplets to celebrate the Chinese Lunar New Year, but two security guards went to Wang’s house, told her no Christian couplets were allowed in their jurisdiction and tore the banners.

Another Christian from the same region, Mei Yunhua, discovered that an official who had tried to prevent her from pasting couplets smeared them with paint on Feb. 17, after she refused to comply. One of them, which proclaimed “God’s Endless Love” had been blurred, along with various other words, making them difficult to decipher.

Later that day, her couplets were also torn off.

This area has a history of persecuting Christians around the time of the Lunar New Year, also known in China as the Spring Festival. Last year, authorities rounded up more than 20 Christians from the home of church member Kong Lingrong on Feb. 19, and shut another Christian family’s power and water off. For a long period after that, someone watched Kong’s home, and plain clothes agents followed him whenever he left.

While Mei was at work on Feb. 19, 2017, police stormed her home and cut off power and water in order to prevent her from holding church activities at her residence. Prior to the authorities ruining her couplets, Mei had not recently held a church service.

The public security officials also demanded that local Christians renounce their faith and required some of them to sign a pledge that they will no longer attend church.

ChinaAid exposes the abuse of Christians in Xinjiang in order to stand in solidarity with the persecuted and promote religious freedom, human rights, and rule of law.