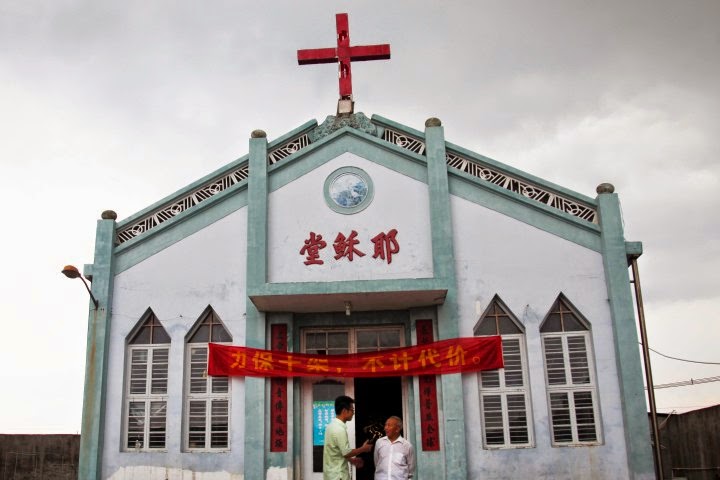 At least 14 and as many as 50 worshippers — some elderly — sustained wounds, including a fractured skull, broken bones and internal injuries.

Their crime? Rallying to guard their church cross, government-slated for demolition.

It was just the latest in the intensifying persecution in Zhejiang Province, one of China’s most Christian regions.

Since January, Communist officials there have toppled the crosses of at least 229 churches. The government has also torn down some churches entirely, and issued demolition notices to over 100 more.

And the crackdown may foreshadow a national shift in official policy on religion, a bid by President Xi Jinping to shore up political stability.

It’s a risky game: In targeting the church, the Communist leaders also target a crucial source of social stability, and may end up politicizing a large and growing part of the population.

For decades under Mao, the Communists banned all religion — enforced with brutality, prison and even death.

Beijing relaxed the ban in post-Mao reforms, allowing some state-sanctioned churches to operate legally, with the state controlling everything from the selection of pastors to the content of sermons to the membership.

Unsanctioned churches also sprung up. The government has tolerated some, while frequently cracking down on others.

In any case, Christianity exploded, both in state-sanctioned churches and in “underground” or “house” ones.

The Pew Forum on Religion and Public Life estimates that 58 million Protestants and 9 million Catholics now live in China. Others put Chinese Christians over the 100 million mark.

Contrast that with the Chinese Communist Party’s 86 million members, and you see why Beijing feels uneasy.

Zhejiang Province was an obvious place to test any national crackdown. When I visited Wenzhou two years ago, the ubiquitous presence of religion startled me: Crosses and steeples dotted the cityscape.

Until now, it seemed a place where the churches and the government had reached a fragile balance, allowing apolitical faith to flourish with relative flexibility.

But Wenzhou’s Christians say that balance is deteriorating. A Wenzhou Protestant e-mailed me:

“Tolerance to Christianity is obviously reducing, and the current situation is really serious.”

Zhejiang’s leaders have attacked even state-sanctioned churches, demonstrating “a little, mini-Cultural Revolution mentality that has not been seen for several decades,” says Bob Fu of ChinaAid, a Texas-based religious-freedom group.

“Obviously, the Communist Party is determined to remove any sign or social forces that are deemed as a political threat.”

In May, a national “blue book” report listed religion as one of four “severe challenges” to national security in China (along with the import of democratic ideals, the influence of Western culture and uncensored Web access).

A few weeks later, a secret-but-leaked government document instructed Zhejiang officials to “see clearly the political issues behind the cross,” “dare to be lion-type cadres” and “correct the phenomena that religion has grown too fast, there are too many religious sites and there are too many activities.”

The bloody crackdown is remarkably short-sighted. China’s Christians say their faith instructs them to obey both the government and God if possible. Beijing will make them choose between the two at its own peril.

This campaign also targets one of China’s strongest sources of social stability.

Amid rising corruption and public discontent, the Communist cadres may be right to think they’re at a crossroads. But if China wants a “harmonious” society, it needs to encourage Christian churches, not tear them down.

Jillian Kay Melchior is a fellow for the Franklin Center and Independent Women’s Forum.