Over a Thousand Kachin Refugees Forcibly Repatriated by China

(Yunnan, China—August 28, 2012) In the past week, Kachin refugees who have resided in refugee camps within Yunnan province of China since fleeing the civil war in Burma (Myanmar) have been forced to return to Kachin by the Chinese government. This has caused hardship and fear for their safety for the repatriated refugees and international concerns have been raised.

The earliest report that the Kachin refugees were being forcibly repatriated by the Chinese government was published by the Kachin independent government on its own website. After ChinaAid learned of this, it immediately sent its Christian reporter in Yunnan to interview the relevant Kachin government officials and learned more specific details of the forced repatriation. 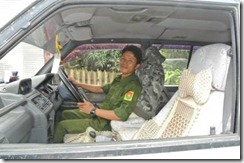 Photo 1. A Kachin government worker who was interviewed 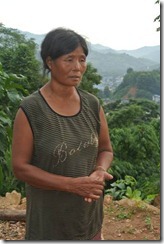 On August 24, together with a Kachin government worker (photo above), the reporter met with refugee Labya Htu. She originally resided in Nongdao Refugee Camp within Yunnan. She told us: “On August 21, the repatriation began. There was no room for negotiation and we must move out immediately.” People begged the people who were trying to drive us out of China: “Let’s beg you. There’s still a war going on there.” However, they threatened: “If you don’t go, we’ll send you to the Burmese!” After that, over 20 vehicles sent by the Chinese government drove into the refugee camp to load the refugees. “Those vehicles are for hauling manure of cows. They stink very much!” said Labya Htu. “Our houses have been demolished through force.” At this point, the Kachin government worker by her side added: “None of the tins, boards, bamboos that were used in building those refugee camps was given by the Chinese government. Yet, they are now tearing down all these.”

Photo 3. View from the outside of the Nongdao Refugee Camp before it was forcibly torn down.

This government worker told me about the current general situation: There were a total of 11 Kachin refugee camps within Yunnan. Besides Nongdao Refugee Camp where Labya Htu belonged, people in two more refugee camps, La Ying and Lung Kawk, were also repatriated. Since it was a forcible repatriation, it has caused chaos. As for the exact number of refugees who have been repatriated, the Kachin independent government itself is not sure, but according to rough estimates, there are over 1,000 people. Among them, 50% of the refugees were sent to Lana Zubja Refugee Camp in the vicinity of Nba Pa within Kachin and 40% of the refugees went back to their own villages. They are all residents of Man Wing county. The remaining 10% of the refugees went to live with their relatives. Some of them are in Nongdao. Some of them are in Lazan. The refugee Labya Htu is now living in the house of a relative. This worker added as a special note: “Man Wing county where 40% of the refugees live is located on the Kachin side of the Chinese-Burmese border. It is ‘face to face’ with China’s Nongdao. Battles often break out in the vicinity of Man Wing county between the Kachin Independence Army and the Burmese soldiers. Right now, there are no battles. That’s why those refugees can go back now. If battles break out again, the refugees will have to return to Nongdao!”

Photo 6. The house in the distance is where Labya Htu lives. The SUV was provided by the Kachin government for this interview.

The Chinese government’s forcible repatriation of Kachin refugees has caused many hardships among the Kachin people. Some people believe that the Chinese government’s actions towards the refugees have resulted from pressure applied by the Burmese government. The Chinese have invested largely in Burma and consequently are very sensitive to demands from the Burmese government. Other people think that the reason why the Chinese government is driving away the refugees is that they want to avoid ongoing responsibility for the refugees. It is believed that once they repatriate the refugees back to Burma (Myanmar) from Yunnan, the media who are focused on the refugees’ plight will no longer pay attention to it. A Kachin person observed: “In 1958, many Chinese of Han ethnicity came to seek asylum in Kachin. We didn’t drive them away. Now, many Chinese are developing resources in Kachin and have made quite a fortune. Seeing this, we haven’t done anything to them. Those refugees don’t want to live in China forever. It is really because there are battles there and it is too dangerous for them to go back to their own villages.”

Before this article goes to press, the Kachin independent government has received the latest news that other refugee camps within Yunnan have received final notice from the Chinese government that they must leave China now.