Jenny Chen, who is in her 50s, was held by state security agents and denied food and water for nearly two days. About to go into shock, she was taken to a police hospital, from where she managed to escape and get on a flight to Los Angeles, arriving in the United States on Jan. 17. 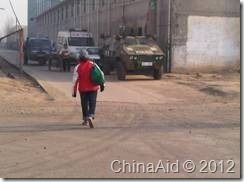 Chen, who does business in Canada, the United States and China, had learned of the severe persecution inflicted on Shouwang Church in Beijing and the Linfen house church in Shanxi province from reports online.

(Photo taken by Jenny Chen on Christmas Day 2011 of an armored personnel carrier and other police vehicles outside Jindeng Church in Linfen, Shanxi province.)

Motivated by Christian concern for her fellow believers, Chen and her daughter traveled to Beijing and Shanxi. On Christmas Day, she was an eyewitness to police action in front of the Jindeng Church established by the Linfen house church. She saw both regular and armed police and police vehicles, including armored personnel carriers, surrounding the church to stop church members from attending a Christmas worship service. Police blocked streets leading to the church and closed nearby shops. Chen was followed and threatened by plainclothes police officers.

In Beijing, Chen had paid a visit before Christmas to Rev. Jin Tianming, senior pastor of Shouwang Church, who has been under house arrest since April 2011, and on New Year’s Day, she and her daughter attempted to attend Shouwang’s outdoor worship service. (See her account here: https://chinaaid.org/2012/01/new-years-visit-to-shouwang-church.html.) On both occasions, she was followed by Domestic Security Protection agents.

Aware that they were being followed more and more closely, Chen put her daughter on a U.S.-bound on Jan. 10, then returned to her hometown in the city of Tianjin. On the evening of Jan. 14, she was forcibly taken into custody by two plain-clothed state security agents who refused to show their IDs and taken to a secret place for questioning. She later realized that she had been kidnapped by Tianjin state security agents. She was interrogated in a cold, windowless cell with only one chair, and was asked what organization she was affiliated with and what overseas mission she was on. Chen said she had no organizational affiliation nor was she on any overseas mission. She said she was simply an overseas Christian whose conscience had propelled her to return to China to visit her fellow believers. The agents appeared not to believe her and threatened to imprison her for more than ten years for subverting state power and stealing state secrets if she did not tell them the truth. The agents also beat her, pulling her hair and slapping her hard.

Chen was detained for nearly two days without food and water, and almost went into shock. Physically exhausted, she was sent to the Tianjin Public Safety Hospital, where she was diagnosed with slight pneumonia and had to be hospitalized. However, Chen had no money with her, and the state security agents said they had no money either. The hospital refused to treat her, giving her the excuse of returning home to get money. Instead, she took a cab and rushed to Beijing Capital Airport, where she caught a flight in the early morning of Jan. 16. She arrived in Los Angles on the following day and is currently undergoing medical observation and treatment.

“It is appalling to hear what Ms Chen had experienced in the hands of the brutal Chinese security forces for simply visiting and trying to worship with the Chinese Christians during the Christmas season,” said Eddie Romero, director of ChinaAid’s Los Angeles office. “The unprecedented persecution against the peaceful house churches like Shouwang and Linfen should be stopped. We urge the Chinese government’s highest authorities to hold those abusers accountable for the harm done to this businesswoman, Ms. Chen.”