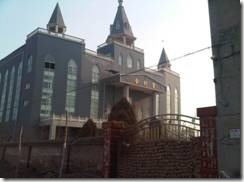 When disaster struck the Christians of Linfen, Shanxi province, in 2008 in the form of political suppression and persecution, it was a great shock to Christians around China as well as those overseas. Yang Rongli and her husband, Wang Xiaoguang, the key leaders of their church, were convicted of “unlawful occupation of public land” and “disrupting social order” and sentenced to seven and 3-1/2 year prison terms respectively. Other church leaders were also sentenced to terms ranging from one to three years’ imprisonment. Armed police took over control of the Jindeng (Golden Lampstand) Church building, which had been built with funds donated by church members. During that time, the public literally turned pale at the mention of Christianity, and evangelism was even considered a crime. Plainclothes agents from the religious affairs bureau and the police department were planted on streets and in alleys everywhere, tailing and even putting people under surveillance as soon as they heard any sensitive [Christian] words. 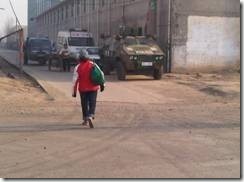 With the passage of two years and the subsequent increase in religious persecution, the Linfen incident has faded from people’s memories. People think that things have quieted down in Linfen now, but does peace really reign there? Follow sisters Jenny Chen and Li Fei and see for yourself from their report and photos what things are really like for Jindeng Church today.

The two sisters felt the constant presence of the Lord’s blessing as they traveled. Before setting off, they searched online for the church’s address and found that all the links from a search of the church address were blocked, and later, they couldn’t even get the search engine to respond. Without a detailed address for Jindeng Church, the two sisters felt very nervous as they set off, and they prayed fervently to the Lord to direct their steps to Jindeng Church on Christmas Day and to preserve their faith and peace. 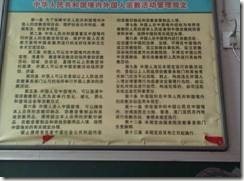 Upon arrival in Linfen, they asked around and quickly got the address of the Linfen church. The two sisters were full of excitement as they hurried to the church. The first thing they saw when they arrived was an eye-catching banner bearing the slogan “Love the Party, Love the Country, Love the Faith.” That’s when they realized that this was a Three-Self church. The “management rules on religious activities of foreigners in the People’s Republic of China” were posted at the entrance of the church, as well as various government-issued guidelines about guaranteeing “harmony”. Because it was Christmas, a lot of officials from the religious affairs bureau and plainclothes police were patrolling the church courtyard. The two sisters left, disappointed.

But the Lord’s blessing was upon them. While they were at their wit’s end about what to do, the two sisters happened upon two elderly Christians on the street. So they asked them about the [location of] Jindeng Church. At first, the two old people were very cautious and insisted that they only attended the Three-Self church. Only after the two sisters said they were true believers hoping to find a true church with true servants of the Lord did the two old people give them directions to Jindeng Church. Then they clasped the hands of the two sisters, praised the Lord and exhorted them to be careful, without fail to be very careful.

Following the directions given by the two old people, the two sisters took bus No. 8 and got off at the last stop: the Linfen Iron & Steel Factory. On the bus, they praised and worshiped the Lord, since if they had been just one minute earlier or later, they would have missed the chance to meet the two elderly believers and would not have been able to learn the location of Jindeng Church. 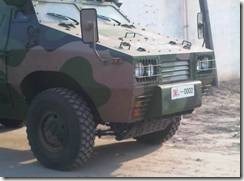 The street where they got off the bus looked deserted and only a few shops were still open; most storefronts were tightly locked up. Off in the distance, the bright cross at the top of the church building could be seen. The two sisters became very excited and walked to the narrow road across the street from the church. Suddenly, they saw that military armored personnel carriers and several police vehicles were parked at the church entrance. Fearing that their cameras might be confiscated and in order to avoid being noticed by the police and wanting to protect the material they had already collected, the two sisters decided to split up. Jenny Chen walked up to the church, prepared to be arrested, while Li Fei stayed outside and took pictures of the church building with her cell phone. 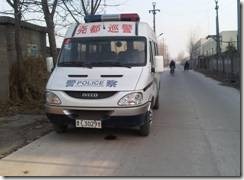 The main entrance to the church was bricked up. There was only a small door to a makeshift gatehouse in front of the church with a sign saying “Door closed. Do Not Enter.” Looking over the low walls enclosing the church compound, a highly fortified scene of armed police and policemen walking back and forth across the grounds could be seen. Jenny Chen was mentally prepared to be arrested by the police for going into the church to find out what the real circumstances were. As soon as she approached the metal gate, she was stopped by the policeman guarding the entrance, who demanded to see her ID. After thoroughly questioning and searching her, including forcing her to endure a body search, the policeman refused to let her in and rudely turned her away. When she appealed to him to let her into the church so that she could pray and worship on Christmas Day, he pushed her around and threatened her, saying that if she insisted on entering the church, she would be taken into custody and detained at a police station. He also gave her a stern warning that visiting the church would be breaking Chinese law, and that those who came to worship here were cult members who would be detained. He said that some people had already been sent to prison for this reason. If you want to participate in church activities, you can only go to government-approved churches. 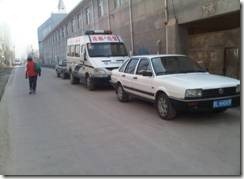 With no options, the two sisters could only leave. On their way back to the bus stop, they asked passersby what had happened at Jindeng Church. Everyone’s face blanched and they all said not to go there, that the further one stayed away the better, lest a person get himself in trouble. A woman passerby who overheard them asking about the church gave them the phone number of a brother surnamed Zhao who she said was a neighbor who used to hold meetings at his home. The two sisters dialed the number many times, but no one ever answered. While shopping at a small store on the street, they asked the shopkeeper why so many stores were closed. The store owner griped that the police closure of the church two years ago and the use of armed police vehicles everyday to guard the church had put people in the area in a panic and had disrupted normal business activities. Some businesses that had donated money to the church’s building fund were forcibly closed down, lost their business licenses, or were forced to leave the area. When the two sisters asked why the police shut down the church, the shop owner said it was because the church had cheated people of their money and illegally raised money to build the church. When asked where they heard about the church fraud , the shopkeeper this is what the police told everyone.

In recent years, the government has been vigorously making a show of religious freedom, spreading wide the hype that China is a country of human rights, religious freedom and the rule of law. They have certainly spared no effort in putting up a good front.

For example, they opened up Three-Self churches, but they put love of the Party and the country first before belief in Jesus. They allow pastors from foreign countries to host evangelistic events in China, but each time, the only people allowed to attend are foreign passport holders or people who work for the religious affairs bureau; meanwhile true believers are always barred at the door. Also, they organized a [Chinese] Bible exhibition in the United States, but within China, it is illegal to sell Bibles outside the Three-Self churches or to be in possession of Bibles donated by overseas churches. Human rights lawyers are convicted of crimes in secret trials, and to maintain the façade of religious freedom while suppressing churches it deems to be too large, the government steers clear of religion and uses other criminal charges – such as illegal fund-raising, disruption of social order, illegal occupation of public land, tax evasion, colluding with foreign powers, leaking state secrets, etc. – to suppress these churches. As a result, many Chinese house churches are afraid to take donations from overseas members of the body of Christ, lest it be used as incriminating evidence.

There’s an old Chinese saying that it is better to belittle first when giving praise [so as to lower expectations and create a contrast that makes the praise seem even better], and this is in fact the way Chinese people habitually behave. In recent years, the government has called for building a harmonious society and freedom and human rights, leading to great hope both domestically and abroad for human rights in China and the belief that the Chinese people are living stable and productive lives and enjoying freedom of religion. But the façade of peacefulness hides a smothering reality. Like a pair of withered hands hidden under a glorious cloak, they are strangling brothers and sisters until they cannot breathe, and giving them no recourse to appeal.

People in China do not know the reality and firmly believe the government’s fabricated criminal charges. The overseas media also do not know the reality and give credibility to the façade created by the Chinese government. It was only through this visit to the real China that we came to understand that brothers and sisters are suffering greatly for the sake of their faith in the Lord. In extremely hostile social circumstances, they hold fast to their trust in the Lord and persevere in standing up for and pursuing truth despite threats to personal safety and the risk of expulsion from school, loss of jobs, homes and physical freedom, detention and imprisonment, and numerous other harm and suffering. We were stunned and deeply moved by their experiences. We hope that more Christians overseas will know this reality and pray for them.

and her report of her New Year’s visit to Shouwang Church
https://chinaaid.org/2012/01/new-years-visit-to-shouwang-church.html