Pastor Bob Fu attended the award ceremony for Nobel Peace Prize and the banquet dinner, and witnessed the historic moment for the cause of human rights in China 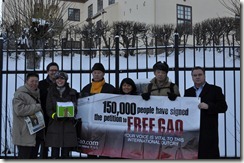 (Oslo–Dec.10,2010) On the morning of December 10, 2010, local time, Pastor Bob Fu, president of China Aid Association, went to the Chinese embassy with a group of people and handed in to them the 150,000 signatures of “Urging to release Gao Zhisheng.” (Right: Prominent US Congressman Mr. Chris Smith) After that, Bob Fu went to attend the award ceremony for the Nobel Peace Prize.

At 12 noon Greenwich Mean Time, with the absence of this year’s Laureate of Nobel Peace Prize and his wife Liu Xia, the award ceremony was solemnly held in Oslo City Hall in the capital city of Norway. In his speech, Thorbjorn Jagland, chairman of the Norwegian Nobel Committee, said: 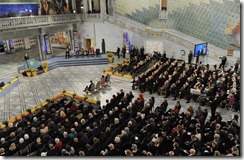 “We regret that the Laureate is not present here today. He is in isolation in a prison in northeast China. Nor can the Laureate’s wife Liu Xia or his closest relatives be here with us. No medal or diploma will therefore be presented here today. This fact alone shows that the award was necessary and appropriate. We congratulate Liu Xiaobo on this year’s Peace Prize.” 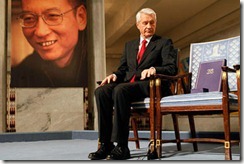 An empty chair reserved for Liu Xiaobo stood on the dais of the meeting place. The prize diploma and medal were placed on the chair. During his speech, the audience rose three times in a long standing ovation.

After the ceremony, Mr. Bob Fu gave in the lobby on-site interviews to many international media outlets, including Al Jazeera.

At 6 o’clock, Bob Fu attended the college students’ torchlight parade in honor of the Nobel Prize.

At 7 o’clock, Bob Fu attended the banquet dinner in honor of the Nobel Prize. The king and queen of Norway, all the members of the Parliament of Norway, other important political leaders of the nation and dignitaries, dissidents from China, reporters, etc. all attended this grand banquet dinner. 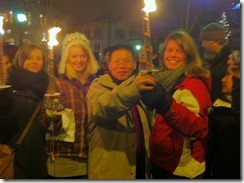 Bob Fu also had a cordial conversation with Chris Smith, an old friend of the Chinese people and a US Congressman who attended this award ceremony. For a long time, Mr. Smith has been concerned about the status of human rights, religion and rule of law in China and has made a tremendous contribution to the democratic process of China. 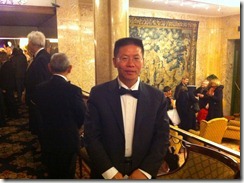 On behalf of China Aid Association, Pastor Bob Fu sent his warmest congratulations to Liu Xiaobo for winning the Nobel Peace Prize and gave his highest esteem to Nobel Peace Prize Committee for its decision. In the meantime, he sincerely hopes the entire world pay more attention to the worsening human rights status in China and the persecution and the new round of escalating suppression by the Chinese government on house churches.

On another development, ChinaAid has learned that at about 3 p.m. on December 9, agents from Beijing Municipal Public Security Bureau and some district branches of Public Security Bureau took away by force Mr. Zhang Zuhua, the writer of the original draft of Charter 08. Mr. Bob Fu expresses his worries and regrets for this incident and calls on the international community to give timely and forceful attention and help. 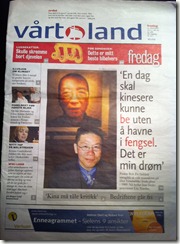 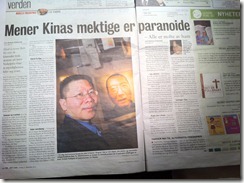 (Photos above: the largest newspaper in Norway reports its interview with Pastor Bob Fu on its front page)

Chinese text (Provided by the Chinese-language section of Deutsche Welle)