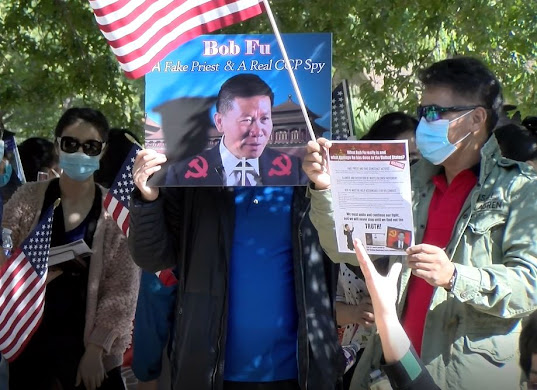 Pastor Bob Fu shares updates on ChinaAid, stating: During a pandemic as well as, amidst harassment, bomb/death threats, and despite lies, God’s ministry continues

Protesters displaying two of the many publications and signs blatantly attacking Pastor Bob Fu.
(Photo: ChinaAid)
(ChinaAid Association, Midland, TX—Nov. 19, 2020) During ChinaAid‘s November 14 (Saturday morning), Webex “Let the Church Rise, hope and glory amid persecution,” Pastor Bob Fu, founder of ChinaAid, co-host with Brother Yun, also known as “The Heavenly Man,” stressed two practices that strengthen one during trials.
“By the grace of the Lord,” Pastor Fu said, “my family and I are safe. ChinaAid continues to minister  during the pandemic, as well as amidst persecution by followers of Guo Wengui, billionaire Chinese media executive.” The harassment, Pastor Fu explained, has included bomb threats and personal death warnings, with posters and publications blatantly plastering lies about him and ChinaAid.

Pastor Fu said that although he and his family remain in an undisclosed location with FBI and law enforcement protection, ChinaAid cannot rest. Still exiled from home, living in five different
locations since Guo’s demonstrators began harassing him, he continues the ministry’s work.

At this time, ChinaAid’s ministry includes the detailed process of rescuing four persecuted families (Christians) from China. One Brother, a former KGB agent, spent 15 years in prison. He, like Saul to Paul, woke up after talking to vulnerable people the Chinese Communist Party (CCP) had imprisoned for their stances on human rights and religious freedom. During his imprisonment, CCP authorities ruined his health and destroyed his family through torture, neglect, and mistreatment.

While ChinaAid conducts behind the scene, necessary work, this brother continues to “hide” in a safe location.

Another “desperate for help” man, not yet a Christian, told Pastor Fu, “In China, my life is worth nothing, I will be ready to commit suicide if I am caught. If you can help rescue my life, I will be indebted to you and ChinaAid for the rest of it….”

If deported back to China, this man and Pastor Fu are 100% certain, he would be killed.

“I don’t want you indebted to me or ChinaAid,” Pastor Fu reassured him. “We are helping you because of Christ’s love. His love, as the Bible says in 2 Corinthians 5, compels us to love others and encourage them to be reconciled to God and His love.”

“One lady we’re currently helping,” Pastor Fu said, “served 18 months in a CCP concentration camp. She told me that she witnessed systematic forced prostitution of females imprisoned there. Now hiding in another central Asian country with her husband and their 6-year-old daughter, their family waits while ChinaAid works to help them move to a safe location. As a first-hand witness to pure and simple evil in concentration camps, she has courage to share her story to help others. Please pray for her and her family.”

ChianaAid is also working to rescue another young Chinese man Pastor Fu spoke with. In his quest for freedom, he swam to a Taiwan military base from China. In the past, he had been sentenced to three months in prison for illegally crossing one of China’s borders. CCP authorities imprisoned him another three years for protesting on behalf of Hong Kong. While imprisoned, prison guards tortured him.

During his swim seeking freedom, this young man said that he had a backpack loaded with survival items on his back while he swam. Due to being buried by waves, however, he tried to throw things from his backpack to lighten its weight. One item, however, he vowed not to throw away—a copy of the Bible. He had wrapped his Bible in a plastic bag to keep it dry. He told Pastor Fu that he had memorized some words of the Lord, but plans to focus on remembering more.
He and Pastor Fu know that only God can save him. They and others in ChinaAid are praying that instead of being returned to China, this young man will be transferred to a safe place in Taiwan.
When God gives him opportunities through ChinaAid, Pastor Fu offers comfort to members of these four families with the Word of the Lord.

Pastor Fu finds comfort for himself and his family from the Lord’s Word as well. Through this pandemic of persecution, and amidst harassment, bomb/death threats, and despite lies, “by the grace of the Lord,” as he stresses, ChinaAid‘s God-inspired ministry, and the gospel’s truth continue.