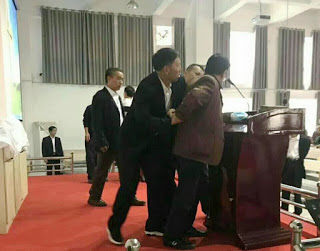 (Beijing–July 14, 2019) Note: The following is a letter written by Jin Mingri, also known as Ezra Jin, who serves as the pastor of Zion Church in Beijing. As one of China’s large, unregistered megachurches, Zion Church has suffered much at the hands of the authorities. Now, Jin writes of the difficulties his daughter, Grace Jin, is facing as she attempts to travel to the United States for school.

I am Ezra Jin, senior pastor of Beijing Zion Church. I became a Christian in 1989 and began serving the church the same year. This year marks the thirtieth year of my ministry in the church.

As many of you already know, Beijing Zion Church was shut down forcibly by the government on September 9, 2018. At that same time, my personal life was also greatly affected.


My daughter, Grace Jin, has graduated from University of California-Los Angeles (UCLA) and received a master’s at the Hebrew University in Jerusalem. She currently has applied and received an offer from Washington and Lee Law School. She has originally planned to return back to the United States in August to further her education.

However, the border security informed her that she was not allowed to leave the country for the crime of “having the risk of harming the country abroad.”

Last year, due to the increasing pressure with the domestic environment, my wife and my two sons have left China to study in the United States. In order to support my children’s education, I need to sell my house in Beijing. However, I was also informed that my house has been frozen. At the time, I have attempted to go through all the legal processes. They all met dead ends.

I feel uneasy and angry by this disregard of law and justice. This is not only a matter of my personal experience, but also I worry for the future of this country.

I specifically ask you to pray for me and my family, and to pray for the rule of law and justice in our country. May God keep us able to learn patience and restraint in the midst of hardships, and may God open the way for us to lift administrative restrictions as soon as possible, and lead a path for my daughter to be able to go abroad to complete her studies.