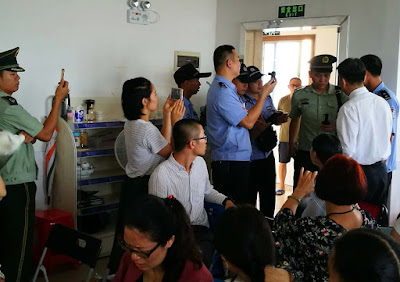 (Guangzhou, Guangdong—Aug. 20, 2018) A repeatedly persecuted house church in China’s southern Guangdong province was holding a service yesterday morning when more than 10 law enforcement officers broke into it without permission and ordered the pastor, Huang Xiaoning, to stop preaching.

In reply, Huang asked that they show respect rather than cut off his preaching.

“You don’t know the severe transgression you have committed by interrupting the sacred worship,” he said. “I will cooperate with you after my sermon.”

A few minutes later, a person from the fire department interrupted him and said Huang was summoned to the fire department for interrogation because of the building’s fire prevention problems, an excuse often levied against churches to keep them from meeting. After a conversation, Huang agreed to being interrogated and said he would go that afternoon, after he finished preaching. The official wrote down Huang’s ID and phone numbers, saying that he should expect a call before the meeting.

In total, the authorities listened to the sermon for 30 minutes. After they left, the service continued, and Huang said to the congregation, “Thank the Lord that our service could be held. Brothers and sisters [in Christ] who are in the congregation, we should all the more treasure every Sunday gathering. I also thank the Lord for leading those law enforcement officers to our church and giving them half an hour to listen to the sermon. May the Lord have mercy on them and open their hearts. May the Lord grant us courage so that we can courageously witness to them about the Lord.”

After the service, a person visiting the church came up to Huang and shook his hand, saying, “When I saw your behavior, I felt that there really is a God!”

This is not the first time the church, which is called Bible Reformed Church, has been targeted. Since the beginning of June, many of the church’s belongings have been confiscated, and it received a fine of 50,000 yuan [$7,453.75 USD]. Despite this persecution, Huang says that they will continue to hold services.

The outcome of Huang’s meeting with the fire department is currently unknown.

ChinaAid exposes abuses, such as those suffered by the members of Bible Reformed Church, in order to stand in solidarity with persecuted Christians and promote religious freedom, human rights, and rule of law.