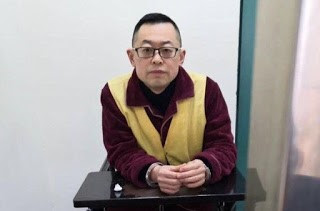 Pastor Wang Yi ‘s poem encourages Christians to: at times be as meek as a lamb, yet sometimes be as brave as a lion

Pastor Wang Yi wrote this poem on a piece of paper the tenth day after the judgment of his first trial. How this poem flew from prison and spread remains a mystery. At the time, authorities were about to send Pastor Wang to jail his words resounded faith, hope, and love.

When the court decreed his sentence, Pastor Wang had already decided not to appeal but to calmly accept his sentence.

As officials did not immediately transfer him to prison as the law requires, Pastor Wang remained in the detention center. We did not learn until summer that officials had imprisoned him in Jintang Prison. Exactly when authorities transferred him there remains unknown.

According to prison regulations, prisoners’ relatives may visit them. Pastor Wang Yi’s parents wrote many times to apply for visitation, but officials refused on the grounds of the pandemic. Pastor Wang Yi’s wife, Mrs. Rong Jiang, and their son, Shuya Wang, have lived at home under police surveillance since the court sentenced Pastor Wang. Authorities forbid them to meet or contact y relatives, friends, or Christians in the church. They may only meet Pastor Wang’s parents once a week—under the “protection” of the police.

Pastor Wang’s parents have applied numerous times to talk with him on the phone. This October, authorities gave Mrs. Rong one opportunity to talk with him for five minutes. Officials forbid them to say anything about religion. As several police officers monitored their call, Pastor Wang and Mrs. Rong talked for only three minutes. Police then forced them to suddenly hang up the phone.

During the 23 months Pastor Wang Yi has spent in prison, officials have permitted only one photo of him to be released to the outside world. Pastor Qiang Peng interpreted Pastor Wang’s poem, his first written words from prison.

First, Pastor Wang is willing to surrender to God’s sovereignty. The trial comes from man, but only with God’s permission, the reason Pastor Wang accepted the sentence and refused to file an appeal. Second, obedience in suffering offers an opportunity for Christians to manifest the love of the gospel. Pastor Wang willingly demonstrates love through his own obedience.

Pastor Qiang calls upon Christians to continue to pray for Pastor Wang.
Pastor Wang’s words encourage others to do as he did; to do “all these things because of love.”