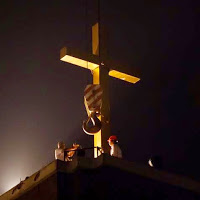 Updated: Pastor, wife sentenced to 10-plus years in prison

Believers take part in a weekend mass at an underground Catholic church in Tianjin November 10, 2013.
The Communist Party in China is enforcing a new policy requiring Roman Catholic officials to carry ID cards stating their religious affiliation or risk losing the right to preach. Christian groups say this is another attempt by the regime to thwart the growth of the Christian faith in the country.
Catholic News Site UCA News reported that Buddhist monks are already being required to carry such ID cards, and by the end of the year the same will be expected of Catholic and Taoist priests.
“Protestantism and Islam — the other two of China’s five officially recognized religions — will surely face orders to follow suit in the near future,” the report suggested.
Persecution watchdog groups, such as International Christian Concern, have called the ID card requirements “Nazi-like.”

“ICC is distressed to hear of the Nazi-like identification credentials for Christian leaders in China. Our concern is that this new requirement will force many churches and their leaders underground,” said ICC Advocacy Manager Nate Lance.
“It is becoming ever clearer that the communist government and ardent Maoist President Xi Jinping is concerned over the growth of the Christian faith in China. We strongly request that the government rescind these requirements for all faiths, allowing the Chinese people to worship as they please,” Lance added.
Religious leaders found without their ID cards will reportedly be banned from engaging in religious activities, said the State Administration for Religious Affairs, which governs religious activity across the world’s most populous nation.
There has been an increasingly growing crackdown of churches in China, with a government campaign forcefully removing rooftop crosses from churches in several different provinces, which has led to the arrest of hundreds of activists and church goers.
Earlier in February, the Chinese government also arrested and formally charged Pastor Gu Yuese of Hangzhou’s Chongyi Church, the largest government sanctioned church in China. Though Communist Party officials say that Gu is being investigated for embezzling funds, groups such as China Aid have said he is being punished for standing up to the crackdown on churches.
News of the new ID card requirement follows a Human Rights Watch report which highlights the growing problems of religious persecution in China. The report noted that the government’s campaign has led to the demolishing of entire churches in Zhejiang Province, considered the heartland of Chinese Christianity.
The Communist Party continues to deny that it is infringing upon the religious freedom rights of its citizens, with party member Li Yunlong writing in China Daily that human rights criticism is “a product of subjective bias and prejudice” with “no foundation in reality.”
“In China, all citizens can freely choose their own religious beliefs, express their beliefs and take part in religious activities. The social environment is constantly improving for the prosperity of religion in China, and society has become more and more objective and reasonable toward religions,” Li argued.
China Aid President Bob Fu told The Christian Post in an interview earlier this month, however, that the government is very concerned about the growth of Christianity, since Christians now outnumber the members of the Communist Party.
“The top leadership is very increasingly worried about the rapid growth of Christian faith and their public presence, and their social influence,” Fu told CP.

Bao Guohua, senior pastor of Jinhua Christian Church, was initially detained on July 26, 2015, along with his wife, Xing Wenxiang, and their son, Bao Chenxing, after they spoke out against forced cross removals occurring across the province. Later, authorities forced them to dismiss their lawyers, and Xing penned letters to family and friends begging them to hire legal aid for her husband on Oct. 20.

On Feb. 25, Bao Guohua and Xing were sentenced to 14 and 12 years in prison, respectively, and Bao Chenxing received a three-year prison sentence. Nine other Christians received sentences of varying lengths.

Below is a report published by the Zhejiang Radio and Television Group and translated and edited by China Aid, reporting the complete sentencing details for Bao and Xing.

China Aid reports abuses, such as those experienced by Bao Guohua, Xing and Bao Chenxing, in order to promote religious freedom and rule of law in China.

For a long time, Bao Guohua and Xing Wenxiang have been thrifty and had clean. In the trial, the “impoverished pastors” guise was uncovered little by little. The prosecutor accused Bao Guohua and Xing Wenxiang of using their positions as the pastor and managing persons to use cash and a car and occupy a house offered by the church members, [items] which should belong to the church, worth a total of 220,000 Yuan [(U.S. $33,683)] and U.S. $2,000.

In the trial, Bao Guohua, Xing Wenxiang, and the others pleaded guilty and [expressed their] willingness to accept the legal punishment. The other people who participated in the offense successively and incessantly expressed remorse for participating in criminal activity, [which was] caused by their being personally deceived by Bao and Xing.