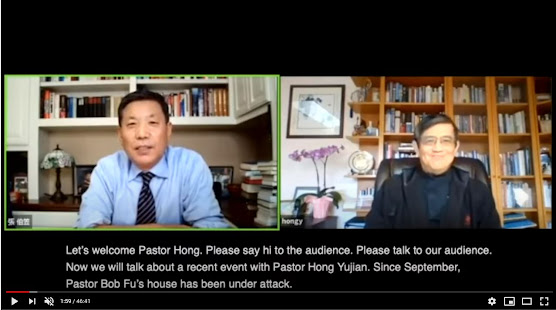 (YouTube—Dec. 08, 2020) Pastor Zhang Boli, author of Escape from China and pastor of “Harvest Chinese Christian Church” in Fairfax, Virginia, joins Pastor Hong Yujian from Shanghai, a board member of ChinaAid living in Canada, to speak out for Pastor Bob Fu on YouTube.

Pastor Hong, who often speaks out for justice, says:

In speaking out for Pastor Fu on YouTube, Pastor Zhang and Pastor Hong recount times in the past they faced persecution in China. As they voice their support for him, they recount times Pastor Fu has supported and helped them. They agree in prayer for him, trusting that from his recent trying times, God’s truths will prevail and be proclaimed.