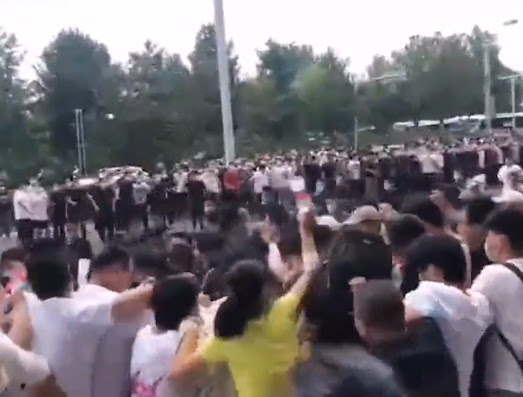 (Zhengzhou, Henan province—July 11, 2022) Chinese government authorities crushed a demonstration of bank depositors. The group gathered in previous months but faced opposition from the Chinese Communist Party (CCP). Their demonstration yesterday was the largest yet with over a thousand in attendance.

Chinese banks froze the accounts of countless depositors, causing many to lose access to their life savings. Hundreds of protestors arrived outside the local China Banking and Insurance Regulatory Commission in May. Interestingly, many of them were derailed by China’s health app. Many received a negative test for COVID before their journey to Zhengzhou city, but their apps suddenly gave a “red” notice once they arrived, meaning they needed to quarantine immediately. This is one of the highest documented cases of the CCP utilizing technology to discourage protest and caused a national outcry. Similarly, members of Zion Reformed were questioned due to their COVID health codes in April.

For their next demonstration, bank depositors arrived as early as 4 AM on Sunday to avoid authorities. According to CNN Business, protestors tried to qualify their stance as against the local government, not the entire Communist Party or central government. Lines of plainclothes officers broke out at 11 AM descending the whole scene into violence. Authorities packed the protestors into dozens of buses which took them to temporary detention sites in the surrounding area.

Some protestors remain detained at the time of this article, but the fate of their movement is unclear. Demonstrators seem somewhat undeterred by the recent response, but Xi Jinping may squash anything resembling dissent with his upcoming third term.