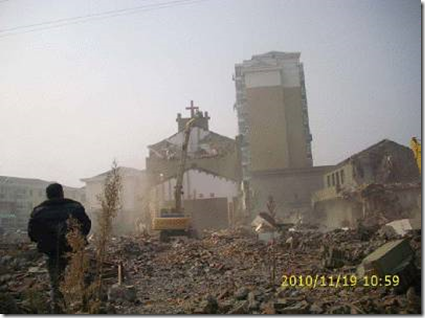 A photo shows the moment the cross at the Chengnan Three-Self Church was torn down when authorities in China’s Jiangsu province forcibly demolished the building on Nov. 19 of last year. Photo Terms of Use
Posted on Apr 4, 2011 | by John Evans & Art Toalston
WASHINGTON (BP)–The Chinese government intensified its pressure against Christians in 2010 for a “fifth straight year of escalating persecution,” according to ChinaAid Association, a Christian human rights organization based in Washington.

Beatings, torture, arrests, harassment and church demolitions are among the 90 recorded cases of persecution, a nearly 17 percent increase over 2009, according to a report released by ChinaAid on March 31.
The cases “are just the tip of the iceberg,” according to a ChinaAid news release. “The Chinese government’s stranglehold on information and the authoritarian regime’s other security measures make getting a true picture of the extent of persecution impossible. Nevertheless, the fact that the documented incidences of persecution came from all parts of China and involved people from all levels of society makes the report a useful guide.”
The report suggested the increase in persecution may have been triggered by the awarding of the Nobel Peace Prize to Chinese dissident Liu Xiabao and the thwarted attendance by more than 200 delegates from Chinese house churches at the Lausanne Congress on Global Evangelization in South Africa.
The report stated that Chinese authorities, in addition to continuing to target house churches and their leaders in urban areas, are adopting three additional tactics of persecution:
— The government is severely cracking down on Christian human rights lawyers, who have increasingly defended persecuted Christians in the country’s court system. More than two-thirds of persecution cases in Beijing involved such lawyers, who are subjected to harassment, beating and abduction.
— While the government is decreasing official prison sentences against Christians who can defend themselves against such measures in the legal system, mafia-type violence and intimidation (some people have simply disappeared) is being used, which leaves Christians no legal recourse.
— The government is punishing Three-Self Patriotic Movement Churches (official churches) that have failed to submit to its complete control. Congregants are beaten, churches forced to disband, and some buildings torn down.
The report documented 3,343 people who were persecuted in 2010, a nearly 14 percent increase from 2009. Detentions increased by 43 percent, and 336 house church leaders were persecuted. Overall, the report said persecution was more than 193 percent worse in 2010 than 2006.
Concerning the three new tactics of persecution, the ChinaAid report noted:
— “Full-scale suppression of Christian human rights lawyers groups: In 2005, Dr. Fan Yafeng, a Christian constitutional law scholar, launched a movement within the church to use legal means to protect citizens’ rights, a model based on the principle of non-violence and in accordance with the actual political and legal situation in China. In the years since, working in partnership with Li Subin, Li Baiguang, Zhang Kai, Gao Zhisheng, Jiang Tianyong, Li Fangping and other prominent Christian lawyers and legal professionals, he established Christian Human Rights Lawyers of China, an unstructured non-governmental organization. From its original single mission of defending the rights of the church, the group’s legal rights defense work has gradually expanded to defending the rights of other citizens and groups, including other persecuted religious groups and individuals, rights defense of petitioners, peasants who have lost their land, victims of the compulsory family planning policy who try to defend their rights, etc. In 2009, the government severely cracked down on a number of large house churches and sentenced a group of influential house church leaders to long prison terms. During this process Christian Human Rights Lawyers of China publicly participated in many major cases (Linfen Church in Shanxi, Alimujiang in Xinjiang), thus greatly raising the church’s awareness of rights defense through legal means. In the meantime, the model of the church defending its rights spread rapidly to the rest of the country and reached its climax in the latter half of 2010. Also in the latter half of 2010, the government began to severely crack down on the members of Christian Human Rights Lawyers of China in a full-scale campaign, and the focus of their persecution was Dr. Fan Yafeng.
— “Abuse, torture and mafia tactics: As a result of the vigorous rights defense movement activities of Dr. Fan Yafeng and Christian Human Rights Lawyers of China in effectively using the existing legal system in China, some local governments were forced to appear in court and hold dialogs with persecuted Christians or non-Christians. This greatly increased the cost to the government of its persecution activities and in some cases resulted in the failure of the persecution. Therefore, beginning in the latter half of 2010, the government began to circumvent regular legal means and instead began to allow law enforcement officers to wreak physical and mental havoc on the targets of their persecution rather than punishing them through legal and accepted methods. In December 2010, Dr. Fan Yafeng was tortured during his nine-day detention. What is worrying is that, judging from the cases in the first three months of 2011, such persecution tactics are being promoted.
— “Severe crackdown on Three-Self Patriotic Movement churches that do not accept government control: 2010 was also a year of persecution of Three-Self churches. This is a special phenomenon and it signifies that it is not just the house churches but the whole of Christianity that the government regards as a threat. Any Three-Self church that dares to adhere to true Christian belief and is not willing to be controlled by the government will be the victim of a severe crackdown sooner or later. These persecuted churches are all large churches led by pastors who adhere to the principles of the faith. The persecution methods are severe and include beatings, abuse, and forced demolition of church buildings. Of course, as a result of the persecution, the reputation of these churches is being turned around, and more house churches and Three-Self churches are coming together, to help each other and to face persecution together. For example, Pastor Zhang Mingxuan, president of the Chinese House Church Alliance, made a number of trips in 2010 to the Chengnan Three-Self Church in Tinghu district, Yancheng, Jiangsu province where he encouraged the clergy and believers and also provided help.”
The report, titled “2010 Annual Report: Chinese Government Persecution of Christians & Churches in Mainland China, January – December 2010,” can be accessed at http://bit.ly/fEZTHv.
–30–
John Evans is a freelance writer in Birmingham, Ala.; Art Toalston is editor of Baptist Press. The ChinaAid Association is on the Web at www.ChinaAid.org.
http://www.bpnews.net/BPnews.asp?ID=34983