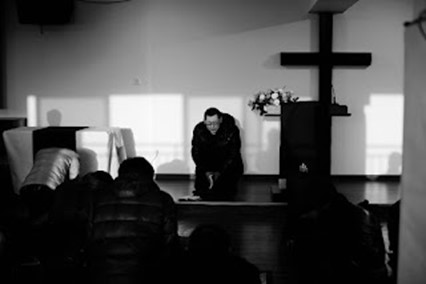 (Chengdu, Sichuan Province—01 September 2021) On August 29, Chengdu Early Rain Covenant Church (ERCC) shared two poems on their Church’s telegram channel that Pastor Wang Yi wrote while in detention, awaiting the court’s verdict. He wrote the poem “To my Wife” on December 26, 2019, the birthday of his wife Jiang Rong, to express how he felt, how much he missed his wife.

Pastor Wang wrote the poem “Missing my Parents” on December 28, 2019, to also convey how he felt… missing his parents. Pastor Wang wrote another poem, “Missing my Son,” for Wang Shuya [his son] on December 28, 2019. Three days later, a CCP judge sentenced him to serve nine years in prison.
While waiting for the court’s verdict, Pastor Wang likely realized the judge would order him to serve a long sentence… that he would be separated from his family for a long time. During his time of waiting, he wrote “To my Wife,” “Missing my Parents,” and “Missing my Son.”
To my Wife
~ December 26, 2019
We promised to meet each other at sunset for ten thousand days,
holding hands and looking at each other with love.
Now, it will be years before I meet with you, the Bible reader, again…
at the aspen and willow trees lined shoreside,
by the “ten-thousand-mile bridge.
Ask Jesus, “What is love?”
In the Garden of Gethsemane, He decided
to give His life to people He loves.
Who will bring the Good News to the Garden of Jushuang?
I do not believe that mandarin ducks’ love lasts forever.

We can tell from the poems that the government officials deceived Pastor Wang. They made him believe his wife was still living safely and freely at their home. In reality, CCP authorities also arrested his wife Jiang Rong, and put her under 6-month house arrest. After that, they released her on bail, pending trial for one year. After the bail period, authorities placed her under strict monitoring. Even today, Mrs. Jiang has no freedom. Officials do not allow her to have any connection with Brothers and Sisters of Chengdu Early Rain Covenant Church.

After the CCP’s December 9, 2018, Church crackdown, authorities did not allow Pastor Wang Yi’s wife Jiang Rong, nor his son Wang Shuya, nor his parents to communicate with Brothers and Sisters of Chengdu ERCC. Each time national security agents found out Pastor Wang or his family contacted fellow Brothers and Sisters, CCP officials threatened them and implemented stricter controls. Although CCP authorities released Pastor Wag Yi’s parents from the 24-hour monitoring several months ago, they have kept Mrs. Jiang under 24-hour monitoring.

The analyses of Pastor Wang Yi’s two poems by the elder from Chengdu’s ERCC:
We promised to meet each other at sunset for ten thousand days.

Most days in Spring, Summer, and Fall in Chengdu, sunset usually occurs at 8 pm. Before Pastor Wang Yi’s arrest, he and his wife promised to pray together as a family at 8 pm every day.

Holding our hands and looking at each other with love.

I hold your hands and look at you with tears in my eyes. Whatever happens, our love in Christ remains solid.

But it will be years before I meet with you again at the aspen and willow trees lined shoreside.

When Pastor Wang wrote the poem, although he did not yet know how long his sentence would be, he knew it would be years. He used beautiful “aspen and willow tree lined shoreside” to contrast the sadness of lovers forced to separate from each other.

The Bible reader by the “ten-thousand-mile” bridge.

Ask Jesus, “What is love?” He decided to give his life to the people He loves

in the Garden of Gethsemane.

Who will bring the Good News to the Garden of Jushuang?

Pastor Wang used the Garden of Jushuang, a small garden near Guojiahuating Community, to indicate Jiang Rong’s residence. Who will share the Good News with her? Who will bring her comfort?

I do not believe that mandarin ducks’ love lasts forever.

Only the love in Christ comes with freedom. Even if we will not be able to be with each other, we can still think of each other and be in love with each other. Our love lasts forever on earth and in heaven. No one can take it away.

I saw my father and mother in my dream,

But when I awakened, I had forgotten my dream.

I pray that the Holy Spirit breathes the breath of life into my parents,

When they wipe their tears when walking beside the sea of glass.

According to the ERCC elder, in Pastor Wang’s poem, “Missing my Parents,” he expresses his deepest wish, that his parents will accept Jesus as their Savior, and one day reunite with him in Heaven. He desires to see God wipe away his parents’ tears in front of His throne.

The peach blossom does not covet fruit
The East wind misunderstands
how I miss my son.
If the lamb did not replace Isaac
How could one compare
the biological with the Heavenly Father?
In the beginning of 2020, shortly after Pastor Wang received his sentence, “Missing my Son,” circulated online.

Since police arrested Pastor Wang on December 9, 2018, as officers blocked information about him, the outside world knows little about his situation in prison. Two years and eight months have passed, but only one photo, three poems, and words he shared on January 9, 2020, have been released. Pastor Wang’s words:

Recently, information circulated on the Internet related concerns regarding Pastor Wang’s situation in Jintang Prison. According to the information, authorities have held him in a cell by himself. He cannot meet nor talk to any other prisoners, except two heavily sentenced criminals.
Prison guards have given him 10-year-old moldy rice to eat. The hospital inside the prison uses expired medicines to treat prisoners. Medical staff, other prisoners, do not have any medical certification. The information has caused major concerns regarding Pastor Wang Yi’s health inside prison.
~ Yu Bing, ChinaAid Special Reporter
###
Let all that you do
be done with love.
~ 1 Corinthians 16:14 (NKJV)
China Aid exposes abuses in order to stand in solidarity with the persecuted and promote religious freedom, human rights, and rule of law. If you wish to partner with us in helping those persecuted by the Chinese government, please click the button below to make a charitable donation.