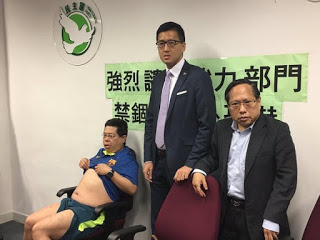 (Hong Kong—Aug. 18, 2017) A member of Hong Kong’s Democratic Party was taken into police custody on Tuesday after holding a press conference describing how mainland Chinese officials forced staples into his legs.


On Aug. 15, images surfaced of Hong Kong police arresting Howard Lam, a member of the Hong Kong’s Democratic Party, in the early hours of the morning. Five days earlier, Lam said that he had been kidnapped by two Mandarin-speaking men and forced into a van shortly before being administered a substance that caused him to fall unconscious. When he awoke, he was tied to a chair, and the men, using swear words common to northern China, beat and interrogated him.

According to Lam, they demonstrated specific interest about a signed photo of soccer star Lionel Messi that he had been attempting to give Liu Xia, the missing wife of the late Nobel Peace Prize laureate and imprisoned pro-democracy activist Liu Xiaobo. Liu Xiaobo was a fan of Messi, and Lam wrote to F.C. Barcelona to obtain the picture when he learned of Liu Xiaobo’s terminal cancer prognosis. Liu Xiaobo, however, passed away on July 13, before he could receive the photo. Since then, Lam has been trying to get the picture to Liu Xia.

The authorities also asked him whether or not he was a Christian. One of the officials said he would “give him some crosses” and proceeded to press 21 staples into cross-like patterns in his legs. Lam was then forced to inhale more of the substance and woke up on a beach in the Sai Kung area. From there, he hailed a taxi and notified the Democratic Party.

At noon the next day, former chairmen of the Hong Kong Democratic Party He Junren and Li Zhuming, accompanied Lam to a press conference. Afterward, he was taken to Queen Mary Hospital, where a doctor removed the staples. Lam had insisted on not receiving treatment until he could share his story. He was released on Aug. 12.

Lin Zhuoyuan, a member of Hong Kong’s Legislative Council who was responsible for Lam’s communication with the press, told a ChinaAid reporter that Lam was at home and needed rest, reassured him that the doctors had found nothing serious, and expressed his hope that the perpetrators would receive justice.

Initially, Lu Weicong, the police commissioner, said that the police were highly concerned about the case. Lu also emphasized that it is illegal for police from other regions to act within Hong Kong.

However, the authorities created a montage of security camera shots allegedly showing Lam on his way home from the shopping center he alleged the men took him from. As a result, the police arrested him on Tuesday morning on charges of and misleading investigators and presenting false evidence.

It is unclear whether or not the man in the footage is actually Lam.

ChinaAid exposes abuses, such as those suffered by Howard Lam, in order to stand in solidarity with persecuted Christians and promote religious freedom, human rights, and rule of law.