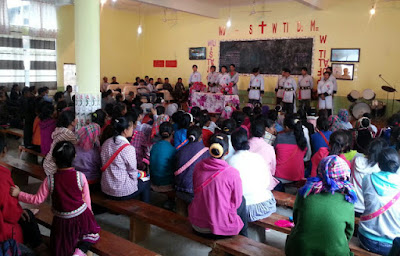 (Guangzhou—Oct. 24, 2018) Police in China’s southern Guangzhou targeted a decades-old church on Oct. 14, cordoning it off.

The church, known as Rongguili Church, was founded by Lin Xiangao, a prestigious Chinese house church leader, under the name Damazhan Evangelical Church. The church began in Lin’s home in the 1950s, and he refused to join the state-run Three-Self Patriotic Movement [TSPM], which is one of two Chinese Christian government institutions. He held the view that political propaganda, which TSPM churches often preach from the pulpit, is not the authentic Gospel, and was arrested as a “leader of counterrevolutionaries” on Sept. 14, 1955. Two years later, he was released, but officials arrested him again in 1958, and he spent the next 20 years behind bars.

After his release in 1978, Lin restarted the church, and the number of attendees soared into the thousands. In 2000, the church moved locations due to city construction.

It had reached an agreement with the local religious affairs bureau and the United Front Work Department, but police blocked it off on Oct. 14, blocking access. The Sunday school and other meetings were canceled, and authorities parked multiple police cars near the church.

Across China, persecution is escalating. In Wenzhou, Zhejiang, local officials have begun stationing personnel in religious venues to oversee their proceedings. Their responsibilities include examining the security of the churches twice a month, collecting intelligence, making sure no minors attend religious events, and assessing whether or not foreigners attend the church. They are also to host two education and guidance events each month, and report once a month to the government. The reports will be kept in intelligence files.