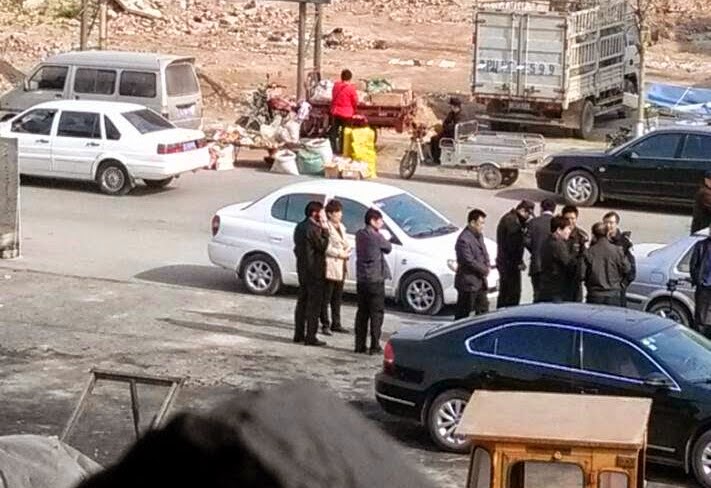 (Nanle County, Henan—April 3, 2014) A large, annual worship service held at the Nanle County Christian Church yesterday, which just so happened to be the same day as the pre-trial meeting for the church’s detained pastor, was blocked by police, resulting in a semi-standoff between believers and police and the detention of one person.

The three-day service, which begins every year on the third day of the third month of the Chinese lunar calendar, was scheduled to begin yesterday morning with several hundred believers, including Christians from Zhengzhou, the provincial capital of China’s central Henan province and some from other province such as Henan’s neighboring Hubei and coastal Zhejiang.

Officers ran off several hundred Christians who had come to attend the gathering. About 40 believers remained at the church and attempted to worship in front of the church’s gate.

“There was no way we could hold a normal gathering. We had to worship the Lord at the gate. There, we sang hymns and worshipped. After the authorities grabbed our musical instruments, we praised God with our hands,” one believer, Li, said.

According to Zhang “Shanshan” Lingxin, Pastor Zhang Shaojie’s daughter, several people were taken from the scene and held at the Nanle County City Hall.

Also, Zhao Shengwei, the church member who was going to present the sermon at the gathering, had his cell phone confiscated and was taken into custody by police, one Christian told China Aid.

“Over 30 people are trapped in the church,” Zhang Shanshan said. It is unclear how those believers made it into the church past the barricaded entrances.

After the initial conflict was over, believers learned that Christians traveling by bus from Zhengzhou, Hubei, Zhejiang and other provinces were stopped during their trip and not allowed to continue towards Nanle County to attend the service.

Zhang Shaojie’s lawyer Zhao Yonglin told China Aid that he had received a phone call earlier this week from the Nanle County Court, saying that a pre-trial meeting for Zhang Shaojie’s case was scheduled for yesterday. “Lawyer Liu Weiguo, [my co-counsel], and I discussed the matter and decided not to go. This is because they didn’t’ give us a response to our requests that the case be tried outside of Nanle County or to our opinion on many aspects of the case,” Zhao Yonglin said.

“There wouldn’t be any significance in us going there. Maybe they’ll give us a notice for the court trial [if we were to go],” he said.

On Feb. 12, during a pre-trail meeting, Zhao Yonglin and Liu had demanded that Zhang Shaojie’s case be tried as a joint case along with the remaining eight Nanle County Christian Church members in detention and that the venue be changed as the lawyers felt justice could not be reasonable served in Nanle County (https://chinaaid.org/2014/02/lawyers-for-nanle-county-pastor-demand.html). The pastor’s trial was indefinitely postponed on Feb. 18, which the lawyers learned through a text message.