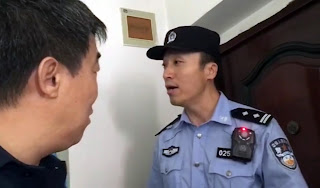 
(Beijing—June 11, 2017) Police interrupted a Bible study in Beijing on Friday and demanded to see the identification cards of those gathered there.

Officers from the Deshengmenwai Police Station arrived at the home of Holy Love Fellowship church member Xu Yonghai, who was hosting a Bible study. They ordered the 10 Christians gathered there to present their identification cards, which they were not carrying. Xu negotiated with them, asking why they had come to a private residence to request identification.

“We were very unhappy about (the intrusion),” Xu said. “We were in a stalemate for 10 minutes.”

When the negotiations failed to reach a conclusion, Xu called the national security’s office. “I said that all our gatherings are open to the public, and that the members are regulars; even the police are quite familiar with us. I said that since we only had a few people, there was no need to check our documents. It was unnecessary to generate trouble.”

In instances that echo this one, the government has serially persecuted Holy Love Fellowship since its establishment in 2004. Last October, three policemen broke into Xu’s home, accused the Christians gathered there of “participating in illegal religious activities,” and ordered them to close the meeting. Authorities attacked the church itself in January 2014 and criminally detained more than 10 Christians on the charge of “gathering illegally.”

ChinaAid exposes abuses, such as those experienced by the members of Holy Love Fellowship, in order to stand in solidarity with persecuted Christians and promote religious freedom, human rights, and rule of law.